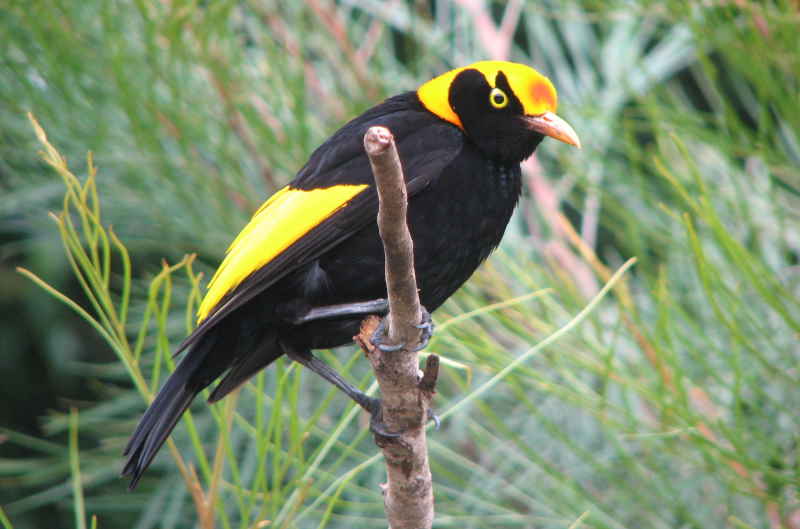 We’ve all heard the tales of visitors to our shores expecting to see kangaroos in the streets of downtown Sydney. There are, of course, special places where such sights can be found. Emus, I discovered this year to my delight, roam the streets of Bollon in south-west Queensland. (Whether the locals find them delightful I did not discover.)

Our world contains many marvellous natural delights, but a recent trip to O’Reilly’s in Lamington National Park has made me reassess the value of human interventions in seeking out these pleasures.

My main mission on this trip was to get a good photo of a Regent Bowerbird, in my view among Australia’s finest avian treasures. I’d only ever spotted it once, in the distance, at Ravensbourne National Park. On my first morning at O’Reilly’s not only did I get the coveted photo, I actually had a splendid male Regent alight briefly on my hand. Delights abounded there: a male and female whipbird, for instance – a species often heard but seldom seen – were in full ‘whip-and-response’ right in front of us, not an arm’s length away.

Many of my fellow nature-admirers were tourists from Europe; I suspect they came away with a very skewed view of the Australian natural world. Whipbirds, which I have glimpsed dimly through the undergrowth perhaps five times in my 50-odd years in Queensland, were more or less available in full high-definition on tap. What must the rest of mundane old Queensland have seemed like after that?

The secret of O’Reilly’s is not just its fantastic and relatively unspoiled natural setting. National Parks signs warn visitors not to feed the wildlife, but that’s just what’s been happening daily around the guesthouse for more than half a century. Seed, fruit and nuts are offered each day, attracting to within arm’s reach (and not infrequently onto one’s head and shoulders) Crimson Rosellas, King Parrots, Satin and Regent Bowerbirds, Yellow Robins, various Honeyeaters, Spinebills, Eastern Whipbirds and many other amazing life-forms.

On the one hand it’s a good thing to have somewhere other than a zoo that people can go to reliably encounter some of our iconic wildlife. My chances would be slim of clearly seeing, let alone acceptably photographing, the Regent Bowerbird without spending months or years of my life in pursuit of that goal.

On the other hand… I do fear that this experience has at least mildly debased any future experiences I might have with bowerbirds or whipbirds. My appreciation will be that little bit diminished for just how precious any further chance encounters will be. A hunger (greed?) for David Attenborough-like experiences leads, I think, to the stunting of our capacity to marvel at the marvellous.

Familiarity, they say, breeds contempt. It’s clearly true: when I see a brush turkey my first reaction is chase it away rather than marvel at its colours or quirky behaviour. (The turkeys and I have a grudging agreement at my place: they rake the mulch onto the paths and I rake it off again.)

Is this a broader problem? Our increasingly virtual world provides the opportunity to see, hear and even feel just about anything. I’m old-fashioned enough to find special stimulation in real-world encounters, but that may merely be evidence that our technology isn’t sufficiently advanced just yet. If the rare and precious is available on tap, do we inevitably weaken our ability to apprehend and appreciate the miraculous in our midst?