Is war the answer? 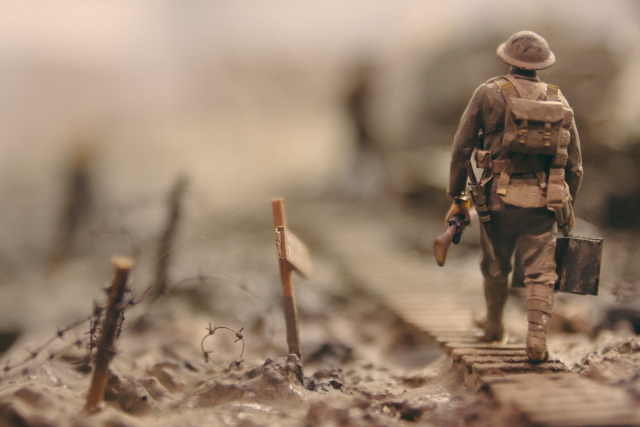 As I get older I seem to be getting more and more averse to the use of armed conflict as the way to deal with international problems. Indeed I seem to have developed a strong sensitivity to the depersonalisation to each other as human beings which war brings.

I watch very little television but last Sunday I caught a few minutes of a story about the interaction between prisoners of war and their Japanese captors. I was surprised at how repelled I was by it and after about five minutes of viewing found it too painful to watch. I retreated to my study and my music.

The program was “Sisters of War” and my comments here are not to make an evaluation of the competence of the writers or the truth behind the story. It may have had a happy ending for all I know, but given the context this seems unlikely. Providing some balance, there was a scene which showed one of the nurses having some rapport with a homesick young Japanese soldier. Yet I found the attitudes generally depicted and the behaviour of human beings towards one another, having been brought together in these harrowing circumstances, hard to bear. I had to tell myself, “They are only actors”.

As is often the case I relate personal experiences such as this to what is being reported in the newspapers and the world around us. Here are a few worth pondering.

“Young lovers lying on the grass whispering sweet nothings is a familiar occurrence in parks across the world. But this mundane scene takes on added significance when you consider that the park in question was in Jerusalem, and the couples getting intimate were Israelis and Palestinians, both apparently secular and religious.

In this troubled and divided city, this picture momentarily warmed my heart, especially following the summer of hate and fear which erupted last year when Arabs and Jews were afraid to cross one another’s paths.

The situation got me temporarily imagining how mass intermarriage would resolve the Israeli-Palestinian conflict within a generation.”
Khalel Dial

Another well-known example of the fraternisation of combatants was that occurring early in World War One between German, French and Scottish soldiers. It was brought again to people’s notice with the recent film, “Joyeux Noel”.

But contrast this with a couple of extracts from the Courier-Mail highlighting some of the events of Great War in this centenary period:

June 1916. The first battle of the Somme began. It lasted five months and the death toll of over one million gained the Allies just 125 square miles.

Thrilling Encounter: [a sub-title of this article is “The Spirit of Australian Heroism”].The Australians recently sent the following message to No. 2 New Zealand Battery which did excellent work upon Colonel Plugge’s Plateau. “Go to it mates. No need for us to use our rifles while you fire like that. The men are so keen that they do not desire to leave the trenches.”

So it is comfortable killing people from a distance, but not so good when you have to ram a bayonet through a man’s guts a metre in front of you and watch a fellow human being roll his eyes and gasp out his last breath in agony.

As we know from the trauma that affects so many returning soldiers, the killers don’t get off from such encounters so lightly either.

And of course since the Great War we have been able to refine killing by remote control by leaps and bounds with such incidents as the bombing fire storm of Dresden, the dropping of the atomic bombs on Japan and the use of Agent Orange in Vietnam to destroy the cover and agriculture of the villagers.

Now we have near the ultimate in remote control where someone can sit in an office in California and send over an armed drone or two to wipe out whomever he or she has chosen to select across the other side of the world. I read recently of one case here where the “selected” person in Afghanistan turned out to be a 60 year old woman who happened to be working in her vegetable garden at the time and was blown to bits.

When I was a schoolboy in the deep South-West of Western Australia, very remote from the battlefield, during World War II we used to refer to the “enemy” as “Gerrys” or “Yellow-Bellied Japs”. I had, of course, never actually met a German or Japanese person. It is ironic to find in all this depersonalisation that a quarter of my ancestry is German. It is regrettable that in some corners of Australian society there remains some lack of perception of the great range of goodness and badness which can be found in any racial, religious or cultural group, whether here or overseas.

So, although he did not always live up to his words, let us be guided by the words attributed to Winston Churchill: “It is better to jaw-jaw than war-war”.