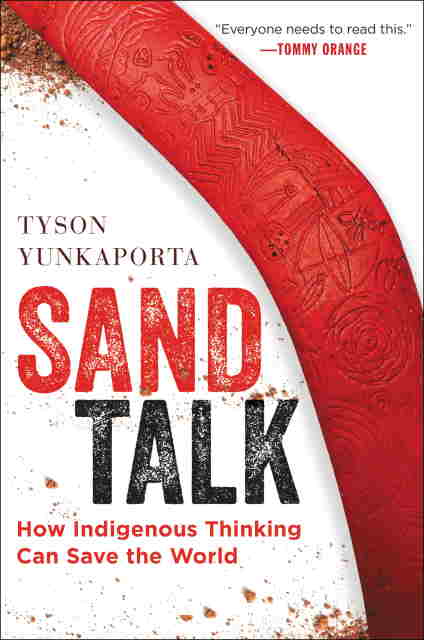 A review by Rachel Matthews

I found Bruce Pascoe’s Dark Emu a real eye-opener. All Pascoe had done was go to our National and State Libraries and read the early explorers’ journals. That caused a shitstorm over his aboriginality from the likes of Peta Credlin and Andrew Bolt. Was that really relevant to the content of his book? I don’t think so.

Yunkaporta tells us that his own life story is neither redemptive nor inspiring. However, I’m like his other readers who want at least a thumbnail sketch of his history to understand how he comes to write from such a broad perspective. It’s not only of his own indigenous upbringing that included, as it did, formative years in places as diverse as Melbourne, Mt Isa and Cape York. But how did that lead him to have the time and the means to travel the world and pick up several degrees and a doctorate along the way?

Yunkaporta points out whitefellas want the world to be simple, but we talk about it in a complicated way. We use ecologically-expensive ways of storing knowledge, such as museums, books, computers or the Cloud, and most people treat all these as disposable items.

Yunkaporta says Indigenous thinking is different.  Blackfellas know the world is complex, and keeping knowledge alive is serious business. Elders are relied on to pass knowledge on to their grandchildren. They have many ways to communicate everything from bloodlines to astronomy, geography to medicine, lore to law through songs, dance, painting, carvings and storytelling. Songs and dances are not only entertainment, but repetition is remembrance. These dances may look primitive to an outsider, but they are far from it. Aboriginal culture and knowledge stored everything they needed using the digits of their fingers and frequent performance of songs and dances.

At first glance, Yunkaporta simply explains the meaning of the horseshoe shapes that frequently turn up in Aboriginal paintings. He attaches them to the five types of memory. The intricacies of kinship-mind are about relationships and connectedness; story-mind is about the role of narrative memory and knowledge; dreaming-mind is all about using metaphors to work with knowledge; ancestor-mind concerns deep engagement, connecting with a timeless state of mind or ‘alpha wave state’; and, finally, pattern-mind is about seeing entire systems. Each of these is revealed and explained in further depth.

In the 2020s, we are all familiar with how children learn in different ways at different stages as their grow. However, the detail and skill of the indigenous grandmothers’ casual transference of knowledge to their grandchildren while sitting under a tree out bush, chasing off the flies, might not look like much to us, but the transfer of knowledge is immense.

SandTalk really brought home to me why the mothers and grandmothers are so upset when their children are taken away and placed in white foster homes and educated only in whitefella schools. To date, there doesn’t seem to be any attempt in the curriculum to recognise that the black kids in the class have a different history to the white. We might think their need for a western education is supreme, but their resultant divorce from country and extended family is likely to severely mess with their heads. We all know how hard it is to learn a second language later in life. In removing these children (however well-intentioned), what is the untold damage? They will miss out on so much cultural lore that is far more difficult to learn later in life. You only need to watch the annual NAIDOC Awards on NITV to realise Australia’s blackfellas are well-able to live in two cultures at the same time. So why do whitefellas still find it necessary to strip kids of one culture while attempting to replace it with another?

Yunkaporta writes about what he calls “the lonely business of tipping the sacred cows of primitivism and progress”. He muses on the iconic prehistoric man as imagined by whitefella and blackfella alike as the ”broad-nosed, thick-browed hairy savage…” and then makes the point that given we now use only a quarter of what our brain is capable of, at what point in prehistory was our massive amount of grey matter developed and why? And how?

We are told that the ancestors survived on a very meagre diet. Yet, at some stage, Homo sapiens had an abundant, fatty diet, enough to promote the development of the large amount of grey matter we carry in our skulls to this day. In the theory of evolution, why – and how – was that large brain developed unless that they were eating a rich enough diet and the brain power was needed in a very sophisticated culture with a great need for memory?

For example: we are taught the punishment of spearing a culprit in the thigh was so primitive. Sure, in traditional Law, punishment was harsh and swift, but afterwards there was no criminal record, no grudge was held; the crime was never talked about again, the guilty party was brought back into the community. How practical! Imagine Australia, or even more, the USA, with no need for prisons! Imagine if all the millions now spent on locking citizens up was channelled into education or some other productive areas of society!

Between each section of the book, Yunkaporta goes off at a tangent on a story which at first appears well off the point.

These include bits of whimsey such as the origins of Father Christmas, his elves and reindeer – too long to recount here. In another, he bemoans the passing of memory when he tells us of the tourists rapturously taking pictures of giant termite mounds in the Top End, when all Yunkaporta sees is that the place is sick and out of balance. He knows the parrots that used to lay their eggs in the termite mounds are gone now because the moths that used to lay their eggs in the same nest are gone as well. The parrots and the moth used to hatch at the same time and the moth larvae would eat the waste of the baby parrots. After the moths were wiped out by cane toads, all the newly-hatched parrots drowned in their own shit.

This book feels like it is cobbled together from a number of Yunkaporta’s academic offerings, but it shines light on aspects of Aboriginality I have never come across before. With the perennial debate on recognition of Aboriginal people coming to something of a climax with the Uluru Statement, it seems imperative for us whitefellas to educate ourselves in Indigenous matters: we may be asked to vote on it one day. Reading SandTalk will take you one big step forward.