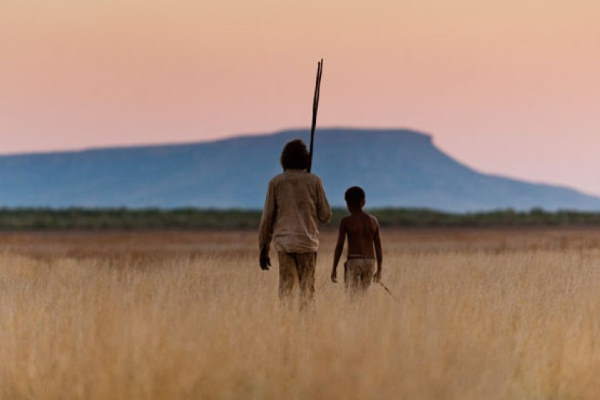 A review by Greg Spearritt

In 2021, cultural identity and the corrosive effects of colonisation on First Australians are topics of renewed interest, in part because of Black Lives Matter in the USA and because of apparently callous attitudes in Australia to Indigenous incarceration and the hard row to hoe of constitutional recognition.

Written and directed almost a decade ago by Catriona McKenzie, Satellite Boy feels like it’s from a gentler time. It tells of a young boy’s mission to save his home – a disused and dilapidated outback drive-in theatre – from a mining company’s development. The boy, Pete (Cameron Wallaby), is caught between the old ways of his grandfather Jubi (David Gulpilil) and a desire to embrace western culture with its alluring technology. Pete and his mate (Joseph Pedley) naively head for town to have it out with the mining company’s head office. They get lost en route and survive thanks to the traditional knowledge Jubi has passed on (plus a little plundering of whitefella resources).

Themes of identity, family, spirituality and culture in a time of change run through the film. ‘Country’ is almost a character in itself, represented by glorious landscape shots of the Bungle Bungles and various murmurs and whisperings as the two boys find themselves challenged and cared for as they find their way.

The film has a spare feel to it, with lingering shots, subdued music interspersed with silence and sparse dialogue, some of it in language. It’s now a familiar genre from other Indigenous films like Samson and Delilah and even – back in the day! – Gulpilil’s first film, Walkabout.

Satellite Boy won national and international awards and scores an impressive 100% critical acclaim on Rotten Tomatoes, though audience ratings on that site are more average. A lack of car chases and titillating violence, one suspects, has something to do with that.

There are no long-term answers in this film, but it does underscore the value of Country and traditional knowledge. For those truly caught between the worlds – which I expect is the majority of First Australians, especially young ones – there is at least cultural pride to find in Satellite Boy. Those of us descended from the invaders need every opportunity to understand and appreciate Indigenous culture and the Country on which we walk; this film offers a little of that and is, to boot, aesthetically satisfying.

Satellite Boy can currently be viewed on Netflix.