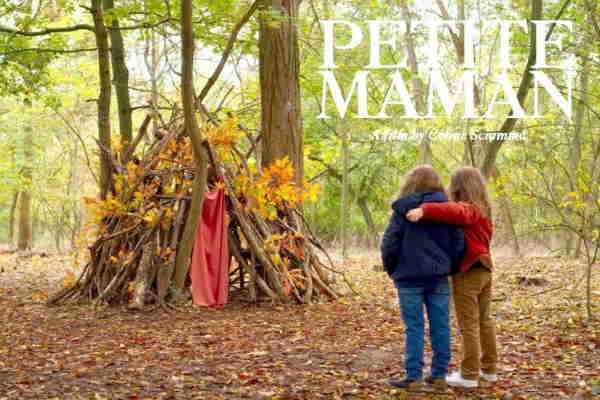 In the middle of the Australian election campaign, with so many vexed issues and so much at stake, it was an absolute delight to enter the calm, thoughtful world of Petit Maman.

Eight-year old Nelly (Joséphine Sanz) has just lost her beloved grandmother without the chance for a proper goodbye. With her parents she returns to her mother’s childhood home to clear out belongings, but her mother suddenly has to leave. As Nelly plays in the nearby woods she meets Marion, a new friend her own age (played by Joséphine’s twin sister Gabrielle Sanz). Nelly comes to realise Marion is actually, somehow, her mother.

I have loved other time-travel tales, most notably the novel The Time-Traveler’s Wife by Audrey Niffenegger. Petit Maman, however, has no need of technicalities or explanations to complicate a relatively simple, beautiful human story of love and life’s travails. Despite the ‘non-natural’ element to the plot, the film is as far removed from the Marvel universe as you are likely to find. And plausibility is not an issue: without fanfare the film gently and persuasively suspends us in its alternate reality.

Director Céline Sciamma (Girlhood, Portrait of a Lady on Fire) takes a mere hour and a quarter to tell her story. The simplicity of childhood proves to be a wonderful lens through which to view adult themes of grief and loss.

The Sanz twins have an unaffected acting style enhanced by a spare script and beautiful cinematography. The film is French, with English subtitles. An Australian version would be radically different, I suspect; it’s hard to image, though, how it could be done better than this.