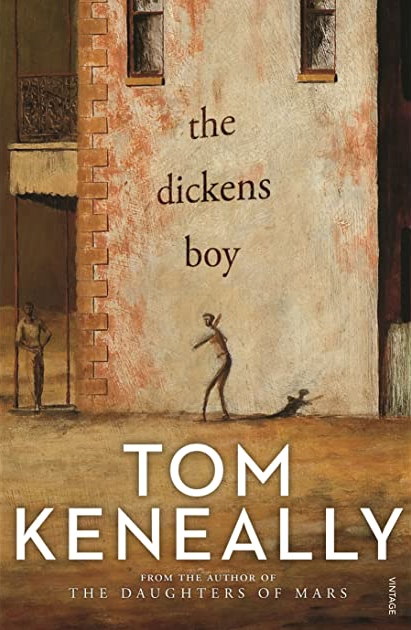 As readers of Charles Dickens’ novels know, the author had a deep interest in Australia and used it as a convenient place to send characters who were down on their luck to ‘make their fortune’. Magwitch, Pip’s convict benefactor in Great Expectations, is the best known example.

While Dickens never managed to come here himself, he did send two of his younger sons, Alfred and Edward, to learn the sheep trade in outback Australia in the 1860s. Edward Dickens (family nickname ‘Plorn’) is ‘the Dickens boy’ of Tom Keneally’s latest novel. Both young men are sent to sheep stations in far-western New South Wales to serve out their apprenticeships as gentlemen-jackeroos. Plorn’s mentor is Frederic Bonney, the selector of Momba Station, a huge spread between Wilcannia and White Cliffs.

As in all of Keneally’s historical novels, he brings a great deal of interesting contextual colour to the narrative. In this book we learn a lot about the early sheep industry in Western New South Wales – the varied backgrounds of citizens, both ‘colonials’ and those newly arrived from ‘Home’, transport by horse, coach and river-boat, bushrangers, funerals, cricket, songs and jokes. Many of the characters, even minor ones, are extremely engaging, some almost ‘Dickensian’, if you like.

‘Plorn’ Dickens himself is interesting, partly because he had, so far, failed at everything he had tried and had not even read any of his father’s books. One of the reasons he is pleased to leave England is that he thinks he will not have to suffer any more embarrassing discussions of the novels with devoted fans.

The running joke throughout The Dickens Boy is that the exposure of his ignorance is potentially even greater beyond the Australian black stump. It seems that every squatter, boundary rider and bushranger worships Dickens, ‘The Great Narrator’, knows some of the books intimately and tries to engage Plorn in detailed analyses of plots, characters and themes.

An important thread is provided by the contrasting sides of Dickens’ reputation – his humane, progressive views on religious, political and social issues on one hand, and his well-attested womanising on the other. His wife, Catherine, bore ten children, but he treated her shamefully, having several long-term liaisons, including those with Catherine’s sister, Georgina, and actress Ellen Ternan, 27 years his junior.

We are led through these very different views when his two sons argue after Dickens’ early death and reflect on their banishment to Australia. Alfred is highly critical of his father, while the younger Plorn is more forgiving. Typical of Keneally’s embedding of factual material within the fictitious, Charles Dickens’ Will is incorporated verbatim, when the young man receives a copy from his Aunt Georgie.

There are a couple of themes, apart from the great author’s hypocritical behaviour, that should particularly interest SOFers.

There are several clergymen in the story, for example, who represent something of a spectrum of 19th Century theology and mission. Plorn generally follows in his father’s humanist, non-theist, anti-Catholic footsteps, but is impressed by the lives led by some of the ‘papists’ he encounters.

More central to the story, especially towards the end of Plorn’s time on Momba Station, are the relations between the First Nations inhabitants, the Paakantyi, and the occupying Europeans – the selectors and their employees. Most readers will find Keneally’s treatment of contemporary indigenous issues to be very progressive, especially in contrast to the actual norms of mid-19th Century outback New South Wales. As usual, however, Keneally is on reasonably solid ground, as the real Fred Bonney was a noted pioneer photographer, well-known for his ‘soft’ treatment of ‘the Darks’.

Good Queenslanders will be disappointed to find out that (spoiler alert!) the role of most brutal racists in the book is filled by the QNMP (the Queensland Native Mounted Police), who have no qualms about campaigning South of the newly-defined colonial border.