Grant, Stan – With the Falling of the Dusk 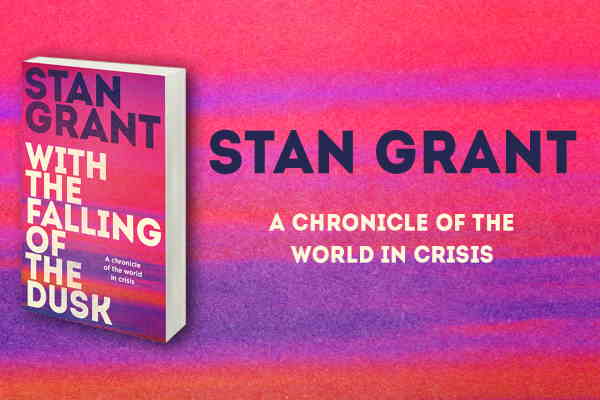 With the Falling of the Dusk

Rachel Matthews reviews With the Falling of the Dusk by Stan Grant.

Around the time ScoMo & Co were stirring up China’s President, Xi Jinping, in a particularly provocative way, Stan Grant’s book With the Falling of the Dusk was released. In it, Stan describes his experience as a foreign correspondent and his impressions of China. For 12 years he was senior reporter with CNN in Asia and the Middle East.

His view of China is very different from that of your average Anglo-Saxon news reporter. Living there, after growing up as an indigenous man in a restless, fringe-dweller’s world, gives Stan Grant a very wide perspective, not only on China and President Xi, but on all the other Asian countries that had been colonised by Britain about the same time as Australia, his homeland.

Stan Grant really does see this from many sides. He talks about the time he arrived by train, not just to visit, but to live. “The China that would be my home had been humiliated; it had been conquered, exploited, dominated by foreign powers. It had been weak…”

But China has pulled itself up again by its bootstraps, and with some particularly interesting leaders. After Mao Zedong came Hua Guofeng, who was soon replaced by Deng Xiaoping. Deng was far more outward looking. In 1975, after a study trip to France, he said, “The more we see, the more we realise how backward we are.” In the city of Liaoning, he said: “If we can’t grow faster than the capitalist countries, then we can’t show the superiority of our system.” Many Chinese students took up his flirtation with democracy.

Across Eastern Europe, similar movements were taking place in many countries. In May 1989, Gorbachev visited China, the first Russian leader to do so in thirty years. Communist leaders, Gorbachev and Deng, were both opening up their enormous countries to Western ideas, But Deng’s invitation to democracy had got out of control. Demonstrations were raging and the Russian leader’s schedule, embarrassingly, had to be changed. Just days after the Russian leader’s departure, things had gone much, much too far for Deng. As Stan puts it, Deng massacred his own people to save his Party.

Stan Grant keeps returning to his own comparisons. This may get wearisome to some readers, but I found it understandable and endearing, repeatedly bringing us back to seeing the world through his eyes rather than our own.

What Stan Grant lacked in opportunities, he made up for in luck. When he was 15, just when he and a bunch of other Aboriginal boys had been told by the school headmaster they might as well stop bothering to turn up at school as they would never amount to anything [common in the 1970s], his father got a job in a Canberra sawmill. This time, Stan and his sister found themselves at an all-white school in a very white town. Luck is risk’s reward and Stan worked hard and took risks.

All his life Stan has been an insatiable reader. His good luck has meant he always seemed to meet the right people at the right time. His willingness to take risks guaranteed he grabbed the opportunities luck offered him. He met a young PhD student called Marcia Langton. She urged him to apply to go to university and helped him fill in the necessary forms. The doors kept opening. He had been in the right place at the right time to report all the world events from the 1987 coup against the elected government in Papua New Guinea, the afore-mentioned 1989 Tiananmen Square massacre and the 1997 handover of Hong Kong. Within a decade of being copyboy on The Canberra Times, in 2004 Stan was living in China reporting for CNN. 1989 was said to mark the end of history. But, as Stan remarks ruefully: “It didn’t end for long.”

Luck has ensured he was there to witness world events and explain them to a Western audience. He lives to understand and empathise with the massive country that still feels the disgrace born of those three centuries of domination by the West. For nigh on a century, every Chinese child has been schooled in vengeance. For them, the West is decadent and poisonous. Current leader, Xi Jinping, seems intent on completing the great rejuvenation and returning the motherland to its rightful place at the apex of global power.

The book covers many world events through to COVID. The pandemic is the only one that has kept Stan Grant on the continent of his birth.

Stan says he looks at the West from the outside in. “I was not born of the West, but the West was certainly born in me” sounds a fitting epitaph for Stan Grant.

In my opinion, ScoMo might do well to down-peddle the Aussie habit of thumbing our nose at authority, and offer a little respect to the current, very successful leader of the world’s biggest country.