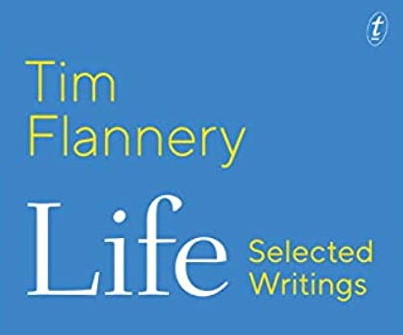 Tim Flannery must be living proof of reincarnation. I can see no other way that he can possibly have done all the things he has done, learned everything he knows, been to all the places and met all the people.

Flannery’s 2019 book, Life, collects essays from 1993 to 2018, on topics as diverse as carnivorous marsupials, the life of William Buckley and how it is that so many women (63% in a Seattle study) actually have Y-chromosomes.

It’s a marvellous miscellany of facts and ideas. We’re drawn into mysteries like immortal jellyfish, why the northern hemisphere was disproportionately affected by the asteroid which knocked out the non-avian dinosaurs, and how the “most beautiful and bounteous region” of what became Melbourne was despoiled by “a hideous tale of greed, dispossession and official incompetence”.

History, biology, climate science, ecology and even astronomy are woven together in this collection. I learned many things, small and large, that I didn’t know – for example, what Botany Bay was originally named by James Cook, and the complexities of the ‘nanoverse’ within us all.

For me, two things stand out in this work. First, the quality of the writing is wonderful. It flows and delights, perhaps reflecting the fact that Flannery’s first degree was a Bachelor of Arts. Second, the book is testament to the fact that a scientifically-minded atheist can find the world a spiritual, awe-inspiring place (if sometimes heart-breaking when it comes to humanity’s effects on it).

Flannery speculates about the future of humanity: are we “destined to populate all of existence, and in so doing to fulfil Alfred Russel Wallace’s vision of perfecting the human spirit in the vastness of the Universe”? Clearly, you’d have to be an optimist to even entertain that idea. He is certain of one thing, however:

“If we do not strive to love one another, and to love our planet as much as we love ourselves, then no further human progress is possible here on Earth.”