Durack, Mary – Keep Him, My Country 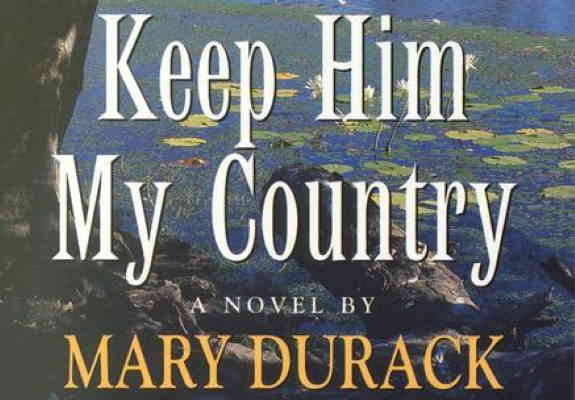 Durack, Mary – Keep Him, My Country

A review by Rachel Matthews

Last year, I went to the BookFest at the Brisbane Convention Centre and got completely swamped, as usual. Just too many books, too much choice! In the end, I picked up one slim little paperback, a novel by Mary Durack, first published in 1955. I had never forgotten reading her Kings in Grass Castles, the story of her grandfather, Patsy Durack. His epic journey across the continent in the 1870s led to the opening up the Kimberleys in West Australia.

Back in the 60s I had spent a fair bit of time hitchhiking in the Top End and working on cattle stations. I always retained a very soft spot in my heart for that country and that way of life, hard though it was.

The novel, Keep Him, My Country, is a soppy little story of a romance between the white station manager and a young Aboriginal house-girl.

Unexpectedly, I found the book intensely moving. It was so obviously written by someone who really knew that environment. Born in 1913, Mary Durack spent her early years in the Kimberley and, in the 1930s, managed one of the family cattle properties, Ivanhoe, with her sister, Elizabeth, and the help of the local Indigenous people.

The depth of Durack’s knowledge, love and understanding of the country and the local Aboriginal mob is evident in this novel. The book shows its age in an extreme paternalism and in terms that look strange, such as ‘fulla’ instead of ‘fella’. On the other hand, the story is set in the first half of the 20th century, and that’s how it would have been. Back before the 1968 referendum, Indigenous people were numbered with the flora and fauna. The referendum meant they were actually finally counted as people for the first time. I was there before that momentous occasion, and I witnessed plenty of things that made me turn the other way and mutter “when in Rome, do as the Romans do”.

What puts this book apart is the depth of knowledge of the Aboriginal way of life in their early days of interaction with whitefellas. There are indigenous songs, in language and in translation. The relationship between the whites, the station blacks and the reserve blacks and the relationship between half castes and full blood, half caste and white, are all slipped in and carefully explained.

For anyone interested in the struggles for recognition blackfellas are still fighting for today, I think this is a fascinating little novel.