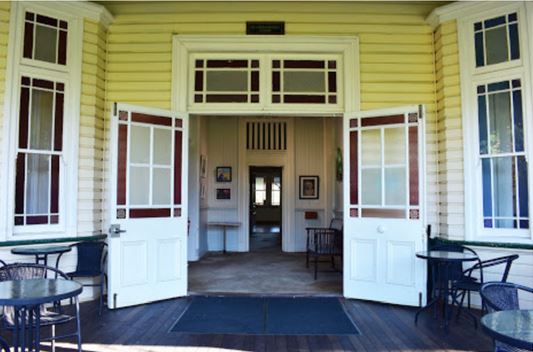 The Anglican Church Southern Queensland has decided to sell the Old Friary at 139 Brookfield Road, Kenmore Hills to Uniting Care, the current owners of Iona, the Blue Care Retirement and Aged Care facility next door.

The site was purchase in 1932 by the Anglican Church and was a Franciscan friary from 1965 to 1987. It became the Brookfield Centre for Christian Spirituality under Rev. David Binns and for many years hosted services, retreats and events.

The recent change of ownership and presumably of purpose is of particular interest to those of us in SOFiA because it was the initial venue for the early meetings of our Association.

Sea of Faith began on Easter Sunday in 1998 at a meeting between journalist Alison Cotes, Greg Spearritt and Neville Buch, then Unitarian minister in Brisbane. They were soon joined by Judith Bore and a month or two later by Rodney Eivers. The first meetings took place in private homes but it was not long before the Old Friary at Brookfield became the favoured location, thanks to the generosity of priest in charge, David Binns. The small Brookfield SOFiA group has continued to meet there for the past 20 years.

After the early years confined to Brookfield, members started looking further afield. Contact was made with Nigel Leaves, an Anglican academic in Perth who had studied the writings of theologian Don Cupitt. Don wrote and presented the 1980s BBC TV series Sea of Faith which had inspired the SoF Networks in the UK and NZ and so strongly caught the attention of Alison Cotes and Greg Spearritt. In due course a first very successful national conference was held in Perth, organised by Nigel.

It was not long before interested people from several Australia states got together, leading to our current incorporated association. Brookfield probably remains the only venue which we have  consistently used since the beginning of the Sea of Faith in Australia (now SOFiA).

We understand that Uniting Care intend to use the Old Friary land to extend Iona to become a much larger facility, including the building of a multitude of independent living units. Importantly, they intend to upgrade the three heritage buildings on the site so that they can continue to be used by the broader community.

At the Old Friary, the Brookfield SOFiA group has on occasion hosted such speakers of international repute as (the aforementioned) Don Cupitt, biblical scholar Bob Funk (founder of the Jesus Seminar in the USA) and theologian Sir Lloyd Geering, famous for his heresy trial in New Zealand. Two of the founding Brookfield members, Greg Spearritt and Rodney Eivers, remain active members of SOFiA.

There was a spin-off from the Brookfield groups when four members attending a meeting one evening responded to words voiced by the late emeritus Professor Rod Jensen. “Gentlemen, we’ve got to do something about this”. What Rod meant was that although we enjoyed the ‘conversation’ which was at the heart of our Sea of Faith meetings at Brookfield, he felt the need for action going beyond the limits solely of discussion. This vision was shared by other Brookfield members Reg Collard, Merv Bengston, and Rodney Eivers. It led to the formation of the Lay Forum, later the Uniting Church Forum. This provides a vehicle for promoting ‘progressive’ Christianity. Its website now has some 1000 subscribers Australia-wide.

Meetings of the Brookfield group of SOFiA continue on the first Sunday of every month at the Old Friary for the time being. A range of topics has been undertaken under the steady convening of Helen Mason. A theme for 2019 and 2020 has been a study of The History of Western Philosophy by Bertrand Russell. There is no requirement of SOFiA membership to attend meetings; all are welcome to join us as we now, hopefully, move beyond the Covid-19 era.

In providing information about the change of ownership of the Old Friary this statement has been made:

It is our sincere hope that Uniting Care will do their utmost to preserve the heritage value and spiritual character of the Old Friary, so that its role in the community, while transformed, will continue in a meaningful way in perpetuity.

It remains to be seen what this will mean in practice but I have written to Uniting Care and may liaise with them to see whether it is possible that meetings or conference facilities might be available for us in their new design and function for the site.

To learn more about the history and functions of the Old Friary you may visit their website at http://www.friary.org.au/