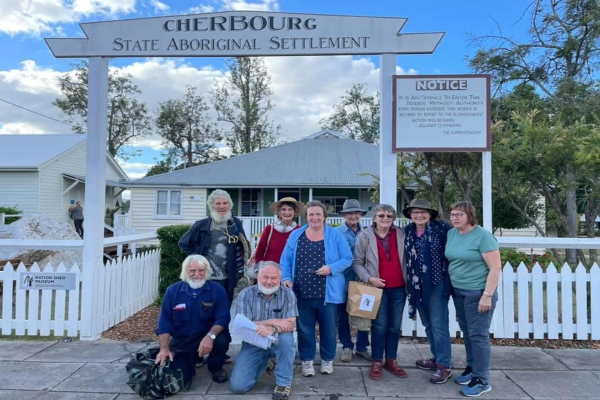 Nine of us Chinchilla Field Naturalists congregated recently at Cherbourg for a tour of The Ration Shed Museum. Our guide was Eric Law, a member of the Wakka Wakka tribe who was born at Cherbourg. He is a retired school teacher who has put a lot of energy into his people & country. In his life he has been, amongst many other things, the only Aboriginal Superintendent of Cherbourg, Mayor, Vietnam veteran & mentor for his people. Eric has the ability to make you laugh or cry. He speaks from the heart.

Through short films and displays we encountered the history of Cherbourg. Here is some of what we learned…

The Aboriginal Protection & Prevention of the Sale of Opium Act (1897) saw the original people of Australia (under the false assumption of Terra Nullius) banished to reserves. Aboriginal Protection was a tack-on to the Restriction of Opium – there were a lot of Chinese in Australia at this time and opium addiction was a problem. Two problems were put together to facilitate control.

Aboriginal ‘protection’ included not having the right to vote (a right finally achieved after December 1965), possess alcohol or access the lands of their birth. Indigenous people had limited access to justice, experienced forced removal from their country and their children could be taken from them without reason. They could be forced to work for low wages, with these meagre wages often withheld (read: stolen). They could be prevented from marrying, their property could be seized, and their mail could be censored.

Our group was welcomed at The Ration Shed and the ongoing discussion was warm & respectful. While I feel a great shame concerning this disgusting example of imperial arrogance, I  believe the power of  goodwill can prevail into the future. I recommend the experience of a visit to Cherbourg.