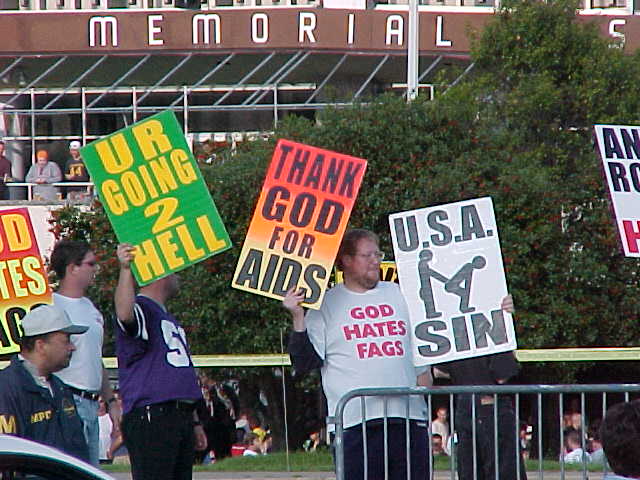 Megan Phelps-Roper is one of the many grandchildren of Rev Fred Phelps, the founder of Westboro Baptist Church, in Topeka, Kansas. For some 30 years, Westboro has been known as ‘the most hated church in the world’ and the Phelps as ‘the most hated family’. Unfollow is Megan Phelps-Roper’s memoir of growing up within the family and becoming one of its most effective campaigners, before fleeing from it at the age of 27.

The Westboro congregation was originally established in 1955 as a branch of East Side Baptist Church under the ministry of Fred Phelps. Because of Fred’s extreme beliefs and the offensive activities of his congregation, they were eventually ejected from the Southern Baptist Alliance and have been condemned by most other Christian denominations the world-over.

Even by the strict Calvinist standards of the Baptist Church, Fred Phelps’ preaching was considered too extreme. Westboro had long campaigned against almost every group of humanity – not just abortionists, adulterers, fornicators, and divorcees, but also Jews, Muslims, members of other Christian denominations, the Government of the USA and the US Army. All were mortal sinners deserving of God’s harshest judgment and punishment.

Since 1991, however, Westboro became infamous for its focusing almost exclusively on one group of sinners – homosexuals. In 30 years, it has rarely missed an opportunity to campaign against homosexuality and America’s increasingly liberal attitude towards it with almost maniacal intensity. Campaigning has particularly taken the form of aggressive picketing of the funerals of American soldiers and victims of mass shootings. Despite the widespread anger and counterattacks that this has elicited, they have continued to display placards saying things like ‘God hates America’ and ‘God hates Fags’.

Local and State government laws have often forced them to stay at a distance from the funerals, but they have remained very visible and continue to obtain a great deal of publicity from the mass and social media. In Westboro’s view, they have total justification for this, since the deaths of innocent soldiers and schoolchildren are all God’s punishment for America’s increasing tolerance of Gays. As God’s faithful Elect, Westboro believes it has the duty to correct society’s sinful behaviour. Its picketing of funerals and denigration of Gays are acts of Christian love.

For more than 40 years after its founding, Westboro remained a largely Phelps family congregation, comprising the many children and grandchildren of Fred and Margie. (They had 13 children themselves.)

Megan Phelps-Roper, the daughter of Shirley Phelps and Brent Roper, is not the only disillusioned family member to have abandoned the congregation and gone public about their life journey ‘from hatred to hope’. Like many of the family, she is a well-educated lawyer and for almost a decade was one of the most trusted and effective activists, largely because of her youthful social media skills.

In Megan’s case, the main catalyst for her decision to leave was the increasing dominance of a group of men in the family, some of her uncles, brothers and cousins. This took the form of ever-greater emphasis on the doctrine of male headship, with further restrictions on what were considered appropriate roles and behaviour for girls and women. Her mother, Shirley, who had been the main spokesperson and picket organizer for years, was herself defellowshipped. Ultimately, Fred was, too, and died alone in a hospice. Family members who were accused of even minor indiscretions were forced to confess and repent before the congregation and ones who had left the community were subjected to extreme vilification.

Megan had, in fact, always been something of a free thinker, questioning, within her immediate family circle, treatment that she felt was unjust and Bible stories that seemed incompatible with Jesus’ message of love and compassion. In the past, she had always accepted reproof and correction from her mother and grandfather in these situations but, as the climate in the community changed, she became more and more confused, conflicted and angry. Her mind went back to the many sermons, prayers and Bible stories that had troubled her, to the picketing and vilification of innocent people, and began to realise that there was a deeper pattern. ‘If the Church was wrong about all these things, what else were they wrong about?’

Megan and a younger sister, Grace, eventually fled. This was accomplished reasonably smoothly, but her mental journey was only just beginning. With the help of some close supporters, she recognised that she ultimately had to work through the anguish of deprogramming herself. This was not just a matter of escaping fundamentalist religious beliefs, but of escaping the comfort of a loving family. It required the development of a largely new sense of identity, which took some years to accomplish. One great advantage she had was her skill with language. She talked at length with many new friends, she read voraciously (from Hemingway to Dawkins) and she wrote obsessively.

The reference to Megan’s ‘loving family’ may strike the reader of this review as odd. But the Phelps were indeed an extremely loving family, much more demonstrative in showing love and affection than most families that I know. For most of the time, that is. But the expressions of affection, kisses, caresses and hugs could be replaced in a moment by stern correction backed up, always, with a string of apposite if cryptic Old Testament references.

This paradox is not the only one evident in the Phelps world. It also comes as a shock to learn that Fred Phelps had long been a supporter of the Civil Rights movement and even won an award for it; as far as Afro-Americans are concerned, he was not a racist.

It is also surprising how willing Westboro was to adopt many aspects of modern culture. In some ways, they were never like the ‘wowser’ stereotype that Australians associate with fundamentalist Christianity. The children did well in the local public schools and were allowed to listen to popular radio, watch most TV programs and sing pop songs. They were very quick to see the advantage of social media as a way to ‘reach out’ to the wider world and, for many years, Megan was their star performer on Twitter.

Such paradoxes in a Christian sect should not surprise. The Manichaean duality of good versus evil often plays a contradictory role in religion, being evident in both the preparedness to find evil in others and an inability to recognise evil in one’s own behaviour. Consider the punishment meted out to early Christian heretics and the Church’s later involvement in the Crusades, the Inquisitions, colonisation, slavery, pogroms and the abuse of defenceless men, women and children in the 20th Century.

Westboro may be different in its targets and methods, but it is just another late, quite extreme example of this pattern. Megan Phelps-Roper went through hell in her journey to understand the irrationality and cruelty of Westboro’s dualist ideology. In an era of dangerous religious extremism, we can learn a lot from her courageous account of the difficulty of deprogramming religious fanatics.

Since Megan’s departure from the sect, Westboro has apparently grown considerably, as its infamy has attracted like-minded extremists from across America and beyond. The legal restrictions on their picketing have had an effect, but it is interesting to see what the present congregation’s view of the current pandemic is. Here are two of the latest posts —