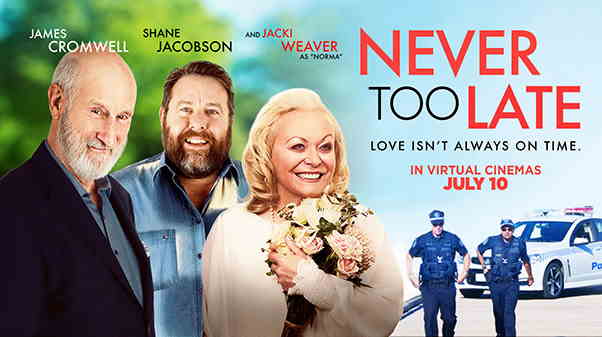 This comedy, which will keep you laughing almost continuously, focuses on four old Vietnam veterans, now in a nursing home in Adelaide – an American, an Englishman and two Aussies. While in Vietnam they had engineered a daring escape from imprisonment and they plot together to do something similar. The American, (James Cromwell), has the most pressing motivation – he has re-encountered an old girlfriend from 50 years ago (Jackie Weaver), who is in the early stages of dementia, and wants to propose to her while she still remembers who he is. Dennis Waterman is wonderful as the English veteran, playing, as he so often does, a loveable rogue, and the quartet is rounded out by two fine Australian actors, Jack Thompson (also developing dementia) and Roy Billing, in a wheelchair.                     .

The plot revolves around their several attempts to escape, until finally they succeed for long enough for each of them to fulfil his most pressing need. The Gestapo-like Vietnamese woman in charge of the nursing home is relentless in recapturing them, and it’s no surprise that there is a back story there which has to be faced and resolved.

Although this is a very funny movie (for me, the most hilarious scene occurs on a Glenelg tram with an exchange between Dennis Waterman and an Irish policeman who is one of those looking to recapture them and take them back), there are some serious themes of particular import for those of us who are seniors. One is the threat of dementia and how to face it; another is the quality of care provided in nursing homes, which of course has been in the spotlight recently with the work of the Royal Commission. (I couldn’t blame these blokes at all for wanting to escape from the nursing home depicted in the movie!) There is the issue of terminal illness and what course of action to take, which one of the four men has to resolve for himself. And there is the issue of power relationships between people of different ethnicities, in war and in peace.

The quality of the acting from the four major characters really makes this movie, though. I reckon the four of them had a lot of fun doing it!