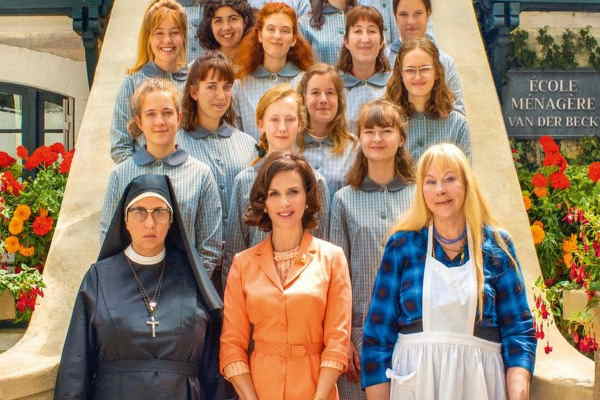 Marie Cameron finds a less-than-typical treatment of feminism in a new French film.

In this somewhat grim world in which we live, there is a tendency to be in deadly earnest about the causes that are dear to our hearts; to entrench ourselves behind the barricade and fire missiles at anyone who tries to breach it. And God help anyone who suggests that there may be another way of seeing things.

No doubt there are many issues which we take on board which demand total commitment and lots of hard work, given the grave injustices and suffering which exist in many societies. But maybe there is room for a little lightness; dare I say it, a certain playfulness.

I’ve been reflecting on this since seeing an excellent French film at one of our local cinemas. The film, La Bonne Épouse, or How to Be a Good Wife, turned out to be a feminist romantic comedy, of all things, and French to boot! Much as I love the French, I have to admit that sexism is fairly prominent in their society and one would not expect this from them. But the director/writer of this film is clearly one of those rarest of creatures, a French male feminist!

The film stars the luminous Juliette Binoche as Paulette, the principal of one of the schools that used to exist in France, dedicated to making young girls into perfect wives. She operates on the basis of seven “pillars”, dreadful requirements for submission and obedience. But the year is 1968 and the feminist revolution is beginning. After a series of unexpected events, including the death of her stuffy and conservative husband, the reappearance of André, a former lover who is determined to restart their relationship with a view to marriage, and the attempted suicide of one of the girls who is to be forced to marry a much older man, Paulette has to rethink her views. She comes to the conclusion that marriage should be an equal relationship. There is a very funny scene when André is trying to climb a drainpipe to Paulette’s room and it begins to give way. Paulette quizzes him on how to make an apple strudel so that she knows he will do his share of the cooking before she rescues him.

The student riots are beginning in Paris and the girls in the school are starting to feel their own stirrings of independence. Paulette decides to take them to Paris. As they approach Paris, there is a gigantic traffic jam which stops their bus, but they all pile off, and singing and dancing, they form a joyful procession towards Paris to join the women’s liberation revolution. The seven pillars become pillars of liberation.

The film avoids bludgeoning its audience over the head with its serious and important message about the need for equality in marriage. In taking a light-hearted and playful approach to the subject, it avoids possibly alienating the unconvinced and demonstrates the joy that a truly liberated spirit can bring to human beings. As they have shown in other movies, probably only the French have the ability to handle such a sensitive subject in this way, with a quirky lightness of touch.

My major cause is feminism, and I admit to being very serious about it most of the time. So I asked myself (and now I’m asking you) – do we risk alienating people by too serious and earnest an approach to a cause we believe in? Can some story-telling, humour and playfulness prove much more attractive in convincing others of the rightness of our cause? Food for thought.

PS No, the French are not immune from taking themselves over-seriously. They seem never to have got over the glorious marching days of the French Revolution, and at any hint of infringement of their rights by the authorities they take to the streets in large numbers. Mind you, I’m beginning to think our rights are in danger because of the (unnecessarily) strict Covid rules and regulations and perhaps we should protest – but that is another story!