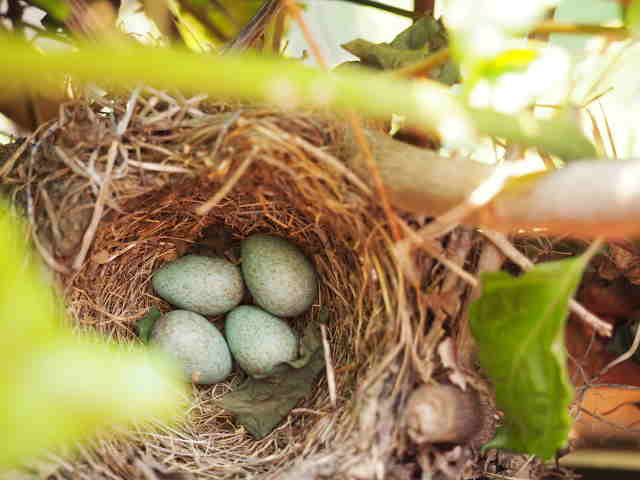 When I was young I remember stealing into the Massey’s farm with my best friend Murray. We were indulging our passion for collecting bird’s eggs. This boys own activity was even then illegal. When we were naively collecting it was far less common than when the Gould League was established, partly in order to discourage the practice. Murray and I just saw it as part of our loving birds and knowing all about their habits. I was always careful to protect the nests and would usually take only one egg from each species. The Masseys had a reputation for not being very friendly towards adventurous boys. Once Murray, the better climber, was high up in a tree… a willow I think it was… that was at the bottom of their driveway. Mrs Massey came home and I had to explain my presence. I can’t remember what I said as Murray was trying to contain his laughter from on high. The shallow nest of the Black Faced Cuckoo Shrike was built in the horizontal Y of a branch right over her head and once Mrs Massey had gone Murray could climb down with one of the black speckled brown eggs in his mouth. This was an easier task than the time he was climbing down a gum tree under serious attack from the Butcher Bird whose egg he had taken. Half way down there was a strange face and his mouth opened to expel the broken egg. Another time I remember he ran to meet me grinning ear to ear probably unaware of how he looked. His scruffy long hair was matted down to his scalp with dried blood which also streaked his face. “I got a Magpie egg!” This was an achievement I was never able to match, mostly for lack of a death wish. The best I could get were discarded broken shells from near the tall trees Magpies would usually nest in. They are a beautiful egg, pale blue with narrow red and brown squiggly streaks.

On this day we went to Massey’s in search of common pigeon’s eggs. We crept around the house to an old silo, climbing down into where the pigeons had taken to nesting. The floor of the silo was about 8 feet below ground level so we jumped to where we could see all the old pigeon nests. Imagine our surprise when we sank up to our knees in muck and found the whole floor floating. Who knows what may have happened if we had gone right through the floor? No-one knew we were even there. Walking on the floor was like walking on sponge.

One day in recent years I was reading a man’s account of his life with alcoholism. He said it was like he was walking through life taking spongy steps. I thought of the silo and it also reminded me very much of a quote from Jonathon Edwards , the famous 18th century American preacher:

“Unconverted men walk over the pit of hell on a rotten covering.”

These kinds of words may have been used to scare faith into people in the past yet they remain very true. Not in the sense of an afterlife and a devil. That kind of speculation seems to me to be a complete waste of time. But living in a hell may be real.

The truth is that some people daily walk in it. The spongy steps of a precarious life of substance abuse can break through into a real nightmare if everything gives way. All the relationships of family, work and society can and do often fall away. Frequently at this low point people are picked up by Christians. I have given up believing in the dogma of Christianity but the mythology remains strong. Christians walk in the belief of the Easter story where Christ was resurrected after a descent into hell. It is a belief in a full life where people can hold firmly to hope even in desperate situations because there is a faith in the renewing power of nature and of relationships and of peoples individual lives. It is a mythology lived out each Easter. It seems a long way from Massey’s farm, smelly pigeons nests and even chocolate Easter eggs.

Things rarely make me as happy as the time I spent in the bush chasing birds with Murray. Metaphysics are not needed to live as boys in  heaven.