Possumbly the worst restoration ever 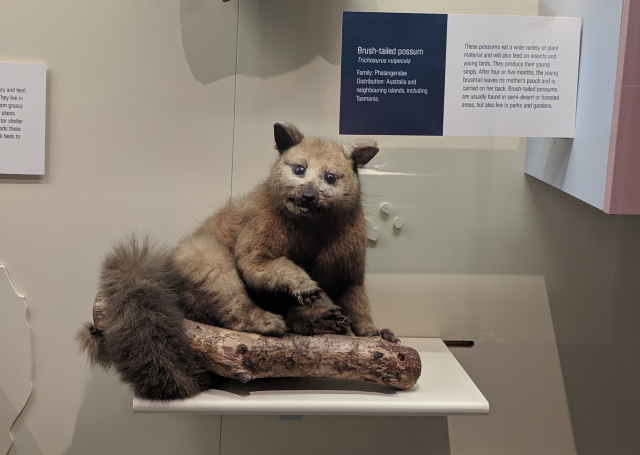 Wandering recently through the British Natural History Museum I was impressed by many of the exhibits. An actual-size blue whale skeleton is truly something to behold.

There is, unfortunately, a certain tedium in trying to navigate an unfamiliar space, and frustration at the limits of museum information panels – how much can you convey, after all, in 150 words? – was building. However, as a true blue lad from the Colonies it was incumbent upon me to have a squizz at the Australian collection before I left.

I stood, speechless, before the small section of Australian animals on display. While some of the creatures bore a passing resemblance to those I knew from first-hand experience, there were a couple of stunners in the cabinet. The koalas, for example, appeared to have been dipped in peroxide: no handsome dark grey and white to be seen here.

Worst by far was the zombie critter the information card claimed was a Brush-tailed Possum. It was easily the equivalent of Cecilia Giménez’s ‘restoration’ of the Ecce Homo fresco of Jesus in Borja. It got me wondering how many other specimens I’d been looking at from other countries were cartoon versions of their actual live counterparts.

In this era of false news and alternative truths it seems even the world’s premier natural history museum can’t be trusted. I get that affairs at Home have been rather fraught of late, and the Colonies just aren’t that much of a priority, but I do hope they’ll put my €10 donation towards acquiring an actually representative Brush-tailed Possum for taxidermy. (If you’re listening, Curators, there’s no shortage of ‘em down under! You could even try New Zealand – they’d give ‘em away.)