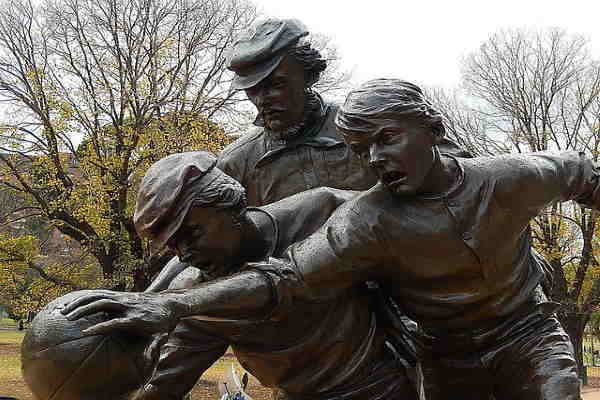 Many of us were shocked recently to learn of the vengeful and indiscriminate murders of Indigenous people that Tom Wills, ‘father of the AFL’, committed in the wake of the Cullen-la-Ringo massacre in 1861 in which his father and other Europeans died – murders he supposedly continued committing for the rest of his life.

Thank the gods for journalist and author Martin Flanagan (among others). It turns out that the 1895 article in The Chicago Tribune which is the basis for the information about Wills was not only deeply flawed, but substantial portions of it were outright fiction.

Even our sainted ABC swallowed (and regurgitated, if you’ll pardon the analogy) the Tribune’s ‘information’ without sufficient fact-checking. (A subsequent article did present a slightly less black-and-white view of Wills.)

Flanagan, author of a book on Wills, paints a much more complex picture of the man who, six years after Cullen-la-Ringo, coached the first Australian cricket team to tour England, a team made up exclusively of Indigenous men. In addition to refuting some of the outrageous claims in the Tribune article, Flanagan points out that there is much we don’t and cannot know about Wills. And he notes that the events of 1861 were from another time, echoing the famous line from L.P. Hartley’s 1953 novel The Go-Between: “The past is a foreign country: they do things differently there.”

Flanagan describes Wills as “an Australian Hamlet, a young man trapped in an impossible history”.

Truth, and people, are complicated. Who knew?