Clash of the religions 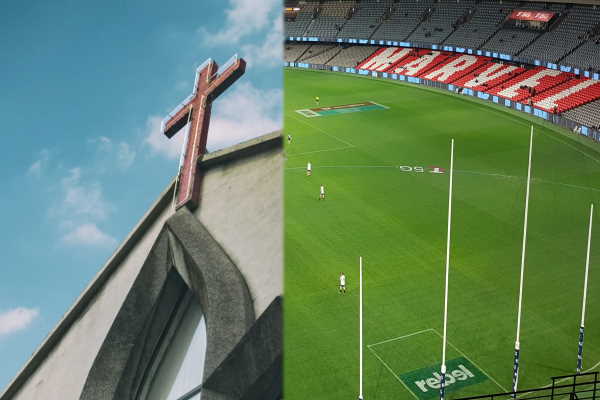 Clash of the religions

Essendon Football Club CEO Andrew Thorburn has resigned after just one day in the job. Whether commentators believe his resignation shows Christians are being ‘cancelled’, or that a conflict of beliefs such as Thorburn had makes a job like that untenable (the conflict, that is, between the anti-LGBT+ sentiment of his church life and the inclusivity goal of the Essendon club) appears to follow pretty closely along with their political outlook. Take the source and authorship off the articles and it’s still pretty clear which ones come from the Murdoch press and which from The Guardian Australia.

A lack of understanding about religion and its foundation texts by our increasingly secular society has been fingered as a key contributor to the debate. No doubt this is true, however extensive knowledge of religion surely isn’t required to say that those taking religious texts literally (inconsistently, of course, as has been pointed out many times – and here) are dangerously out of step with contemporary secular standards. The harms associated with homophobia and discrimination on the basis of sexuality and gender are well-researched and known. In contrast, I have yet to see research suggesting depression, anxiety and suicide are commonly outcomes of Christians being ‘cancelled’.

To follow the Essendon debate, here are some links:

Former Essendon chair Paul Little says AFL club is making ‘too many’ mistakes (ABC News)
Oct 5 – Andrew Thorburn has called for religious tolerance and freedom of thought after a club ultimatum that saw him resigning as Essendon chief executive, just a day after his appointment.

‘Dangerous idea’: Thorburn releases fresh statement about Essendon exit (Sydney Morning Herald)
Oct 5 – Short-lived Essendon chief executive Andrew Thorburn says it is a dangerous idea that a religious faith could render someone unsuited to a role, after he spectacularly resigned from his position at the AFL club.

Thorburn case shows vulnerability of human rights protections at work (Sydney Morning Herald)
Oct 6 – (Opinion: Paul O’Halloran) Andrew Thorburn, former chief executive officer of the Essendon Football Club, would appear to have been the subject of what I as an employment lawyer would call a “forced voluntary resignation”.

Conflicts were too great for Thorburn to keep both jobs (Sydney Morning Herald)
Oct 6 – (Opinion: Andrew Alexandra) On Monday of this week Andrew Thorburn was appointed as CEO of the Essendon Football Club.

Thorburn church pastor regrets ‘sloppy analogy’; legal options against Essendon grow (Sydney Morning Herald)
Oct 7 – The pastor whose controversial sermon led to Andrew Thorburn’s abrupt resignation as Essendon CEO has repeated his apology for the words he used, while a religious discrimination law expert laid out a dual path for possible legal action against the Bombers.

What does the Essendon CEO saga have to do with school uniforms? (ABC News)
Oct 8 – (Opinion: Virginia Trioli) Two vastly different story threads crossed for me this week, although they appeared to have nothing in common at the time.

Essendon, Andrew Thorburn and Christianity:  The battle of values that cost a man his job (ABC News)
Oct 9 – (Opinion: Stan Grant) The culture warriors are arming up again.

It seems that faith is not only unacceptable, but now must be cancelled (Sydney Morning Herald)
Oct 9 – (Opinion: Barney Zwartz) The Andrew Thorburn fiasco raises complicated questions that are hard to reconcile.

Essendon drops ball on the right to religious freedom (The Australian)
Oct 9 – (Opinion: Chris Kenny) Andrew Thorburn, white, male and Christian, is a prized trophy of the cultural warriors who are intent on tearing down what thousands of years of Western civilisation have delivered.