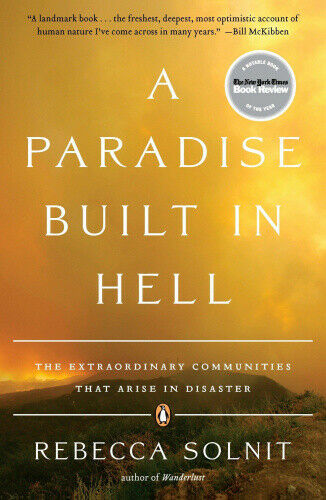 From the voice of altruists, a paradox emerges: self-sacrifice as a two-way street.  Giving and helping make them feel a part of something larger than themselves.  Helping makes them feel needed and helpful.  In a sense they are taking care of themselves, but a society in which they all ordinarily did this would be paradise indeed.  (p.197)

If you found yourself a survivor in a desperate situation, would you act the hero or act selfishly to look after only yourself?

Few of us ever get an answer to that question. According to what Rebecca Solnit has discovered from her extensive research regarding post-disaster behaviour, there is an extremely high probability that you would just get on and sacrificially do whatever was most needed in your immediate location, and then keep doing it, and keep on doing it. And you will be hungry, you will ignore the pain of your own injuries, you will be bitterly cold, and sleep deprived. And you will experience a pure joy that will bubble up from within you. You will experience an enormous depth of connection with your co-workers that will amaze you. And this would be the case almost completely regardless of any other factor that currently shapes your actions and your attitudes, or even the person that both you and your acquaintances know you to be.

Does this match with your current framework of ideas around disasters and people’s responses in the immediate aftermath?

Rebecca Solnit is an American author of twenty-plus books and a journalist. In this book she focusses on five major disaster events to explore the essential nature of humans: what we are and what we can be. She is particularly interested in what these events show about people when their external world is brutally torn away from them, when they must act as individuals freed from normal society structures, expectations and connections. What sorts of behaviours commonly emerge when people are shorn free of “deeply entrenched commitments and connections between individuals, families and groups?”

There are of course also dark sides to disaster responses. She explores how people’s responses to a disaster situation directly relate to what they believe and how they perceive those around them. There is a range of responses, short and long term, including:

The five disaster situations she has chosen to underpin this exploration are:

These cover a long time span and each is very well documented. There is a breadth of experience represented in these five. Differences include disaster type, degree and type of personal injuries, resource availability post-disaster, response from authorities, the nature of the spontaneous communities that formed, technological advancement, timespan of the disaster disturbance and the ongoing impact to the societies they occurred in.

This book is very much worth the reading for what it reveals about who we truly are. It is deeply moving, thoroughly researched and beautifully written.

I will end on some words from the author’s epilogue:

Recognising the wealth of meaning and love that such work provides is the reward that disaster invites us to claim. The fact that joy is found in the most unpromising circumstances demonstrates the desires that have survived dreariness and division for so long. The existing system is built on the fear of the other and scarcity, and this has created more fear and more scarcity. However, it is mitigated everyday by altruism, mutual aid and solidarity, by those who are motivated by hope and by love.   p. 312

Disclaimer: views represented in SOFiA reviews are entirely the view of the respective authors and in no way represent an official SOFiA position. They are intended to stimulate thought, rather than present a final word on any topic.