Kent, Jacqueline – Vida, a Woman for Our Time 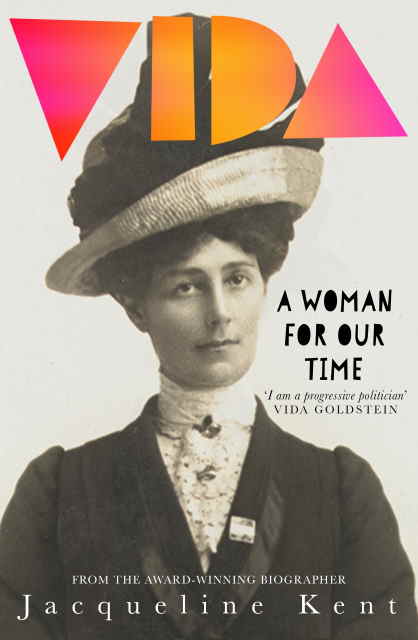 Since Biblical times, the lives and stories of thousands of women have been suppressed and erased by the patriarchy. It is only in the past fifty years that efforts have begun to remedy this situation, and to retrieve and honour these stories. Jacqueline Kent is among those working to bring this about. Having already written biographies of pianist and activist Hephzibah Menuhin and former Prime Minister Julia Gillard, she has now produced an interesting biography of Australian suffragist and feminist Vida Goldstein.

Kent competently depicts the social and political situations of Vida’s time – the 1890s depression, Federation, the fight for woman suffrage, the First World War – and explores Vida’s reactions to these events. My only criticism is that she too frequently compares Vida’s beliefs and actions with those of modern feminist women (e.g. Julia Gillard), rather than just allowing Vida to be who she was, an early 20th century activist and feminist.

Vida was born in Portland, Victoria, in 1869, and educated by a governess and then at PLC Melbourne, a progressive school which produced women pioneers in many areas, including the girl who later became Dame Nellie Melba. Vida’s parents Jacob and Isabella worked on various schemes to relieve poverty, and Vida became involved also. Until her death, Isabella was Vida’s closest supporter in all her endeavours.

During the hard economic times of the 1890s, Vida opened a mixed gender primary school, her main object being to support her family, and ran it for some years with the assistance of her sisters. She also became involved in a campaign to open a hospital for women, the Queen Victoria Hospital, which became operational in 1899. And she supported an active woman suffrage movement in Victoria, where attempts to introduce this were repeatedly defeated in the Upper House.

When Christian Science arrived in Melbourne, Vida joined the church with her mother and a sister. The egalitarian nature of this church founded by a woman, the lack of hierarchy and equal valuing of all members, would have been most attractive to feminists like the Goldsteins. Vida remained a committed Christian Scientist for the rest of her life.

Meantime, Vida, with her brother in law’s assistance, founded a monthly newspaper named The Australian Woman’s Sphere – the first of several which she was to publish – as a mouthpiece for the women’s suffrage movement. The first issue appeared in 1900, and the Commonwealth Franchise Act of 1902 gave Australian white women the vote Federally and permitted them to stand for Federal Parliament. (Victoria did not give its women the State vote for another five years!) Vida also founded and ran an organisation to promote women’s political rights, and during the war, a peace association for women.

After a successful visit to the USA as a representative of newly enfranchised womanhood, during which she met all leading American suffragists and feminists and President Theodore Roosevelt, she became the first woman in the Western world to become a candidate for a national Parliament, at the election of 1903. She was unsuccessful, and likewise unsuccessful at several further elections at which she was a candidate. The problem was that, as well as being a woman, she ran as an independent (having a lifelong suspicion of political parties), and had pacifist and socialist views which would not have appealed to a broad range of voters in conservative Melbourne. In fact, no woman was elected to the Federal Parliament until 1943.

Vida continued to campaign for women’s rights, making contact with the English suffragettes. This also brought criticism upon her head from those who disapproved of the suffragettes’ militant methods. She was invited to England to help the suffragettes in their campaign for the vote, was part of organising the great suffragette procession of 1911, and met and became a friend of George Bernard Shaw. She was back in Australia in 1912, and during World War I actively campaigned for peace and justice for women who were suffering as a result of wartime stringencies, and against conscription, which brought her into conflict with Billy Hughes and into danger from soldiers and others who saw her activities as treasonable.

After the war, Vida went to Europe to take part in an international women’s conference on women’s rights held in Zurich, which was very critical of the provisions of the Treaty of Versailles. She then spent time with friends and family in England, refocussing her life and thoughts away from political activism which for her had brought limited success. It was time to pass the baton to others. Upon return to Australia, she became a full time accredited practitioner for the Christian Science church, and this was her focus for the rest of her life, though she continued to speak and write when invited to do so. She died aged 80 in 1949.

In her Epilogue, Kent provides some startling statistics concerning the current position of women around the world and in Australia. For example, a 2016 survey of women politicians from 39 countries found that 82 per cent had been subjected to some form of psychological violence and 44 per cent had suffered violent and threatening behaviour. In Australia, women are not part of the major parties’ power structure. With the level of threats to women politicians and the treatment meted out to Julia Gillard and Julie Bishop, it is no wonder that few women are seeking to enter parliament. Kent tells us that there are more men named John on the boards of major companies here than there are women, at all. And the World Economic Forum Gender Index is a global measure of women’s attainments in four areas: economic participation, health and survival, educational attainment and political empowerment. In 2006 Australia was 15th in the world; ten years later, we had slipped to 45th, behind Serbia, Laos and Cuba.

Vida Goldstein knew that she had embarked on a long, long journey. Were she here now, she would see that there is still a long way to go.