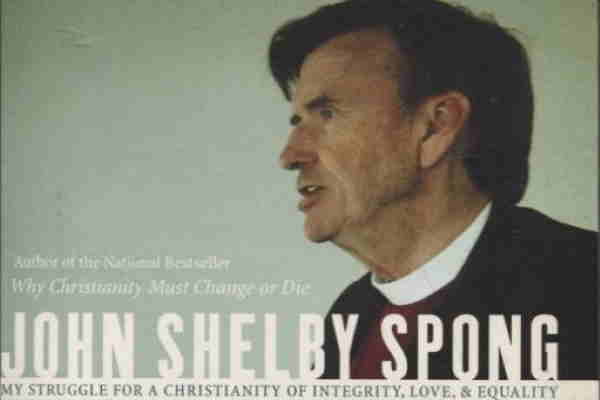 This edited version of an address given at a Brookfield Centre workshop in Brisbane in August 2001 has been disinterred from the SoFiA Bulletin of September 2001.

Spong passed away recently. For all his faults – and there were some – Spong, who died in October 2021, gave many church-weary and doctrine-weary Christians a reason to hope that Christianity could be something more, and better.

Is Bishop John Spong right or wrong? In a word: both.

I think he’s right in many respects.

First, his approach is right. You may have seen that banner with the bloated question mark flapping in the grounds of your local church. What the Alpha Course promises is badly needed: open, honest exploration is an essential part of ‘growing in faith’. Unfortunately, the banner is false advertising. Alpha is about ready-made answers, not about questions.

Spong says ‘orthodox’ Christianity has become a kind of religious straitjacket. I agree. For evidence, let me submit the existence of the Sea of Faith Network. Sea of Faith, or allied groups, now exist in the UK, NZ, the USA, Canada and South Africa as well as in Australia. SoF presents these people with an opportunity they find rare in Christian church circles: the opportunity to say and explore what they really think.

Doctrinal orthodoxy is, I believe, just what Spong says it is: the point of view which won out, not necessarily the ‘right’ point of view. We recall here that the Greek derivation of the word ‘heretic’ means simply ‘able to choose’.

Second, I agree with Spong that much Christian doctrine and practice is outdated and irrelevant. The Virgin Birth does make sense – but only if you believe women to be mere vessels in which the male seed grows to fruition, if you see sin as sexually transmitted, and you believe in a literal Adam.

A supernatural, interventionist God is irrelevant to many in an age when daily life is lived functionally without God. Scott Cowdell in his book, A God For This World, acknowledges that

A miracle-wielding potentate who finds me a parking spot in my hour of need and yet who, in his wisdom, allows the kind of suffering we see everyday on the television news: that kind of God no longer cuts the mustard.

As for Christian practice: take prayer. As an Anglican for the best part of forty years, I would pray week by week for the Church. Specific Anglican bishops, dioceses and parishes around the world supposedly benefited from this (though I confess to having been a little drowsy by that stage of the service!): but I do not recall – ever – any Catholic parish being prayed for. No Baptists or Presbyterians, let alone, God help us, Unitarians or Buddhists or Moslems. They didn’t exist (and, to my knowledge, still don’t).

There is, of course, the issue of morality as well as relevance. In the words of English clergyman and theologian Don Cupitt,

a good deal of standard Christian doctrine now has a bad smell morally. Living by it as it stands is actually harmful to people. (Reforming Christianity, 72)

Spong is right to call traditional Christian theism and some of its outworkings ‘morally bankrupt’. Male headship, the priestly franchise on forgiveness, the hypocritical call for gays and lesbians to be celibate, a reliance on the promise of heaven and the sanction of hell to produce ethical behaviour, the invoking of God as we wage war, miracle cures for the faithful, a God who requires that we placate and flatter him, and who demands a blood sacrifice as the price of redemption… Spong is right. It’s irrelevant, and it often stinks to high heaven.

A third respect in which I believe Spong to be on the right track is in his assessment of scripture. It is not a set of propositions ‘once for all delivered to the saints’. The Gospels, as Spong says, are not in any literal sense holy, they’re not accurate, they’re not to be confused with reality. They are beautiful portraits designed to point readers towards the holy and the real (108).

And the Bible is certainly not a ‘maker’s manual’ on how to live an ethical life. Spong’s exposition of the Ten Commandments (149ff) is required reading here. I recently read a report which said that rap singer Eminem was intending to quote scripture to his audience to show them how hypocritical were Christian opponents to his concerts. Does anyone doubt he could find a good number of verses from the Bible that are offensive to our modern sense of morality?

Fourth: Spong is right to emphasise the importance of the human factor in religion.

The basis of ethics, says the Bishop, is to be found in our own humanity, not in some divine or eternal law undergirded by God (160).

What is Spong advocating here? Christian humanism? But where would we be without the ethical guide and constraint that the traditional Christian God represents? Isn’t there, behind all humanist views, a naïvely optimistic assessment of humanity, a view forever tarnished by the World Wars of last century, if not by Rwanda, the Baltic wars, East Timor and the rest?

I grant that humans fail, even when their intentions are impeccable. However, I think history shows that they fail every bit as much – if not more – when they profess to rely on God to guide their decision-making.

Personally, I’m in favour of Christian humanism. I think we should, as Bonhoeffer suggested half a century ago, be living before God as if there was no God.

At the Anglican Synod in Rockhampton Diocese many years ago I heard the presiding Bishop announce – in case we got carried away with our power to change things – that the Anglican Church is not a democracy. Anglican hierarchical authority is another hangover from feudal times which needs to change, as John Spong observes. Future worship, he says, will be less hierarchical, more egalitarian. It will be more exploratory, less defensive. It will treasure, but not be bound by scriptural traditions (187). That’s my kind of religion, with room for human creativity.

A fifth point on which I believe Spong is right concerns the nature of theology. In Western Christian traditions we have taken our words and images about God far too seriously. So seriously, in fact, that we have taken to worshipping them. Spong is right to quote with approval Clifford L. Stanley’s view that “Any god who can be killed ought to be killed” (xix).

We do need words to bring religious experience out of the realm of private delusion. However, as Spong says,

The very moment we move from ecstatic proclamation to explanation, the presuppositions, definitions, and stereotypes of the ages begin to shape our words. That is inescapable. (75)

That is why we must sit light to our theological formulations, to our creeds and doctrines and practices. In a sense, it’s what SoF is about: resisting the urge to idolize or set in concrete any of our notions about the sacred.

Is Spong wrong? I say yes, in three ways.

I think he’s wrong about God.1. Spong claims to reject the God of theism. God is not external, but is to be found “in the depths of our own humanity” (187). Nevertheless, God is

the presence that is over, under, around, and through the very fabric of life, the God who is not a personal being but who is made known in the personal being of the whole creation. (196)

God for Spong is Tillich’s God, the Ground of our being.

What Spong is rejecting, it seems to me, is not theism as such, but rather the remote God of classical theism. Spong’s position – perhaps best described as ‘panentheism’ 2. – is, in my understanding, still a species of theism.

In any case, this does not go far enough for me. I prefer to see God in ‘non-realist’ terms, as a symbol for the values we hold most sacred; as Don Cupitt describes this position, God is an ideal, an integrating concept applied to experience rather than a reality presenting itself to us in experience.

One consequence of this disagreement with Spong is that I do not share his conviction about life after death. I do agree with him that people these days very much focus on this earthly life. Indeed, I find that an unambiguously good thing, given the devaluing of this world inherent in much Christian discourse over the centuries. However, the notion of personal existence beyond the grave becomes increasingly bizarre to me as I get older.

On a second point I also beg to differ from the good Bishop. He says that Buddhists “clearly believe in God, but not in a deity who is defined in theistic terms”. (57) He describes a well-known Buddhist monk as living “inside a God consciousness” (185).

It’s not enough, you see, that many Buddhists can be deeply religious and lead fruitful and ethical lives. Spong has a deep respect for Buddhists, but in communicating this he has to resort to describing them using Christian categories.

I think his position does not in fact do justice to Buddhism in all its varieties. Spong’s words do not treat with respect the self description of many, most notably Theravadin, Buddhists who do not in any sense ‘believe in God’. I see echoes here of Western imperialism, the implication being that Buddhists do not really know themselves, but are best known through Western Christian eyes.

On one final point I think Spong is wrong: that is, with respect to his program for reforming Christianity. He seems to believe, as Don Cupitt puts it, that all we need to do is replace a lot of untrue and morally objectionable doctrines with a smaller set of true and morally edifying ones (73).

In my view, the most profitable path would be to dispense altogether with creeds and doctrines. Stop pretending that we all believe, or even should all believe the same thing. Focus in worship on the values held in common and on the grace, love and fellowship that can be found in any human community which meets together with benign intention.

Actually, in my experience this tends to happen anyway. Do people go to church for a hit of doctrine? I think Spong underplays the role of community. For me, it’s the community that’s sacred, not the metaphysics.

Spong’s language is required to be, and is taken to be, edifying and nontechnical rather than philosophical. He has to use language which simultaneously suggests to some of his audience that he is making a radical break with tradition, and to others of his audience that the old realities remain reassuringly in place after all… [S]omeone who must speak and be heard mainly in a church context is not quite allowed to say anything too clear or definite. (Reforming Christianity, 70)

Cowdell, Scott A God for This World (Mowbray 2000)

Spong, John Shelby Why Christianity Must Change or Die (HarperSanFrancisco 1998)