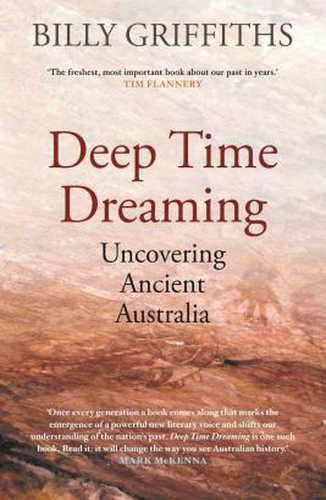 My archaeological education was almost entirely through the British TV Channel 4’s Time Team with commentator Tony Robinson. The first of these was made in 1994. Sometimes the conclusions the Time Team came to seemed a little far-fetched, but I was still fascinated by the amount of history that could be deduced from artifacts recovered from a carefully excavated site.

I flew into Sydney as a ten pound Pom in 1963. Back then, to the general public, Australia’s history didn’t seem worth searching for in the same ways as that of Britain or the Middle East.

But recently Billy Griffith’s ‘vivid, evocative prose’ has absolutely changed my perspective on Australia’s history and pre-history. As he writes: “Beneath a thin veneer, the evidence of ancient Australia is everywhere, a pulsing presence.”

When the British colonised the continent, Aboriginals were thought of as Stone Age people and, apparently, had not changed in the 200 years since. As nomadic hunter/gatherers, most of their artifacts were made of biodegradable materials – not that we knew that terminology then – and had naturally returned to nature. Apart from some large middens that told us they liked their seafood (what’s changed there?), some intriguing fish traps at Brewarrina and lots of impressive rock art, the natives hadn’t left a large footprint. In any case, they were soon going to disappear as a race, absorbed into the general Australian population in the deliberate policy of assimilation. In the deserts, customs had still been practised in our lifetime and were recorded on film. This was of no interest apart from mild curiosity. There didn’t seem much point in digging anything up. It was all going to be the same.

That general opinion was the greatest frustration to Vere Gordon Childe who had returned to Australia in 1957, after a stellar career in the northern hemisphere. Childe felt so despondent about the state of Australian society and felt so redundant on his return, that he jumped off Govatt’s Leap in the Blue Mountains six months later in a meticulously-planned suicide.

Childe is the first of ten Australian archaeologists Billy Griffiths chooses to tell the story of Australia emerging from being a colonial backwater to a world leader in the search for history before history. The next archaeologist is John Mulvaney, whose star was rising around the time of Childe’s demise. Mulvaney studied history at Melbourne University and won a travelling scholarship. He earned his PhD in Archaeology from Cambridge UK. He then enrolled in a bachelor’s degree in Archaeology ‘because he needed to learn the rudiments’. He said he hankered after the Iron Age but knew he must return to the Stone to study the history of the Aboriginal people.

At this precise time, American nuclear chemist Willard Liddy was refining the new technique of carbon dating. When John Mulvaney realised its implications in the field of Australian archaeology, he declared: “A new time machine has been invented!”

Similarly, author Billy Griffiths earned a place on his first few excavations working as camp manager and cook: “By day I would trawl through ancient kitchens and by night I would cook for a team of hungry archaeologists.” Griffith spent weeks “sorting stones from bones, shell from charcoal” beside an outcrop of the Arnhem Land escarpment and uncovered finely worked stone tools under car parks, shopping malls and market gardens in square holes dug in the urban fringes of Australia’s capital cities.

Griffiths never committed himself 100% to archaeology as Mulvaney had done. Griffiths writes he has sought to maintain “an outsider’s perspective… an assessment from the fringes, steeped in the neighbouring discipline of history”.

When it was easy to think Aboriginal culture hadn’t moved on in thousands of years, there seemed little point in organising excavations. That was until a particularly distinctive stone tool was unearthed hundreds of miles from where it came from. This tool had not been picked up from the surface by the stone collectors of the early 1900s, but unearthed from a layer of overburden that had not seen the light of day since it was covered by the silt of floods in prehistory. The only reasonable explanation could be that it was deliberately brought there in trade between the continent’s early inhabitants. Carbon dating was verifying what Indigenous people were telling whitefella Australians with increasing confidence: that the Dreamtime really did go back to the beginning of time. Or at least long, long before the pyramids of Egypt or the stone henges of the UK. Aboriginal history way back in the mists of Deep Time had become much more important and interesting, not just to Australia but to the world.

Disclaimer: views represented in SOFiA reviews are entirely the view of the respective authors and in no way represent an official SOFiA position. They are intended to stimulate thought, rather than present a final word on any topic.