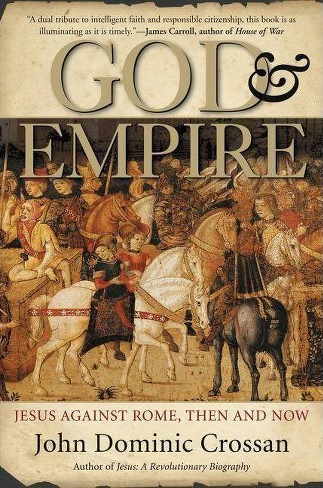 Rodney Eivers finds in Crossan’s 2007 book a cautionary tale
relevant to the unstable world context of 2022.

Given my minor role of bookseller, an enquirer had wondered whether I had any copies available of God and Empire. I did not, but the topic sounded interesting so I acquired a copy and set out to read it myself.

While written in 2007, I found the argument this book puts is very relevant to the state of world affairs in 2022.

In delving into God and Empire one comes soon to discover why John Dominic Crossan has such a pre-eminent place in Bible scholarship. His is a wide and generalised view of history but his claims are well backed up by anthropological and literary research. An example of such detail would be in relation to the claim that Paul and fellow Christians upset the Roman hierarchy by referring to Jesus as  ‘Lord’ or  ‘Son of God’ when such titles were owned solely by the emperor of the day. This is a view commonly stated. Crossan, however, provides numerous examples which can still be seen today where such titles for the emperor are inscribed in stone monuments from that period.

As the title implies, the book takes a broad sweeping view, as other writers also continue to do, of those first few centuries of the common era.* As the subtitle says, it was ‘Jesus Against Rome, Then and Now’.

But this is not a treatise akin to other popular studies over the years seeking to tell the story of the triumph of Christianity over the Roman Empire. It is much more a warning directed at Christians today to be careful and selective about how they read and understand the Bible. The empire, which he explores and draws as paralleling the power of Rome, is that of the current United States of America.

In its conclusions and perspectives, the book is an observation of the growing polarity of American society.

Given my own ethnic origins and nationality I had been expecting more generalisation so as to include the relationship of Christianity to other historically dominating entities such as the British and Islamic empires, but those are is not even hinted at. Such comparisons by other writers elsewhere could make interesting reading.

God and Empire introduces a theme which Crossan expands in his 2015 book How to Read the Bible and Still Be a Christian. This is to draw the contrast between retributive justice (ill will and punishment) and distributive justice (goodwill and the sharing of resources and responsibility) attributable to God as told in the Bible. Within the Bible there are as many depictions of a God of violence as there are of a God of peace and love.

The big reminder to us, including me, is to be wary of the claim that we can stick to the New Testament with the Jesus story as a recipe for an environment of peace and harmony. We may be tempted to discard, or at least downplay, by contrast, whatever we may derive from the Old Testament.

Crossan’s message is that the New Testament with its climax depicted in the book of Revelation can hold its own for savagery with the Old Testament stories. And he reminds us that the protagonist in Revelation is revealed clearly as Jesus himself.

I write this at the very time when Russia and The United States are facing off with the prospect of war in Ukraine. Crossan notes one ancient writer’s observation in relation to the wars which shaped the middle east at the time of Jesus. We can anticipate the prospect of major conflict. He quotes the danger given from that period being demonstrated when one power, in this case, Greece, was rising in influence when another power (Persia) was waning. This, of course, is the very situation we are facing with the rising influence and belligerence of China and the decline and loss of direction in America.

All this current war talk upsets me. Have we not learned from the slaughter of the previous century? With the United Nations and other international groupings, we have the structures for international cooperation. Despite this, nationalism continues to reign supreme. I was most disappointed by the withdrawal of Britain from the European community – Brexit. Instead of confronting Russia and China with threats of military reprisal why not invite them to join NATO and other consultative bodies?

Even more disappointing is it that our Christian churches gives this issue little priority. The threat of war is right up there with destructive climate change as an issue to be faced by our children and grandchildren. And yet I see only token protest by our mainstream churches at the rhetoric of violence which we have been seeing in our news headlines over the past twelve months and more. Recently in looking down a list of intercessory topics suggested for the Uniting Church Assembly, the issues of bringing God’s attention to the prevention of war between nations was right at the bottom of a very long list.

In a rare exception, at the micro level, however, it was heartening to view the ABC’s TV Compass programme recently depicting the action by a small group of Catholic lay people. They risked jail for bringing to the attention of the Australian public the military purposes of the surveillance establishment at Pine Gap near Alice Springs.

But to get back to Dominic Crossan and the American empire. His great concern is that fundamentalist, Christian America is prioritising the biblical God of war rather than the God of peace. It is noteworthy that this book was written before the ascendancy of Donald Trump to the presidency of the United States. Trump appears to receive strong backing from many fundamentalist Christians in that country. Apparently, he still does retain their support, and it seems that about half the American electorate would be prepared to vote him back into office. Furthermore, regardless of personal inclination, whoever is leader of that nation still has to deal with its powerful military-industrial complex. This can weigh heavily on any decisions on international relationships. And for us in Australia, as has become our national habit, with general agreement of both major political parties, we can expect to follow the United States into any war.

So, do the Australian churches have a contribution to make here? Surely rallying for peaceful responses to international problems is called for in being Jesus people. We are reminded by our founder that even bad people love their friends. The challenge for us, as followers of the man from Galilee, by contrast, is to love our enemies.

Moreover, in using the Bible including the New Testament as a recipe for living, let us be sure to be selective in our claims when we conclude our scripture readings with the assumption  ‘This is the Word of God’.

Reason to be wary of this is well explained by John Dominic Crossan in God and Empire.

* A current title of this nature brought to the attention of Australian readers this year has been  After Jesus Before Christianity by Vearncombe, Scott and Taussig.