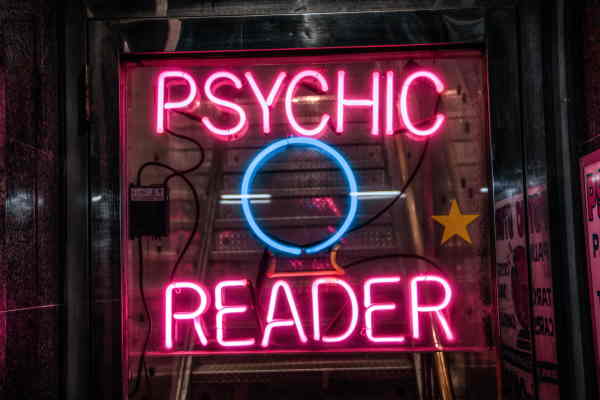 Greg Spearritt reviews Gary Nunn’s The Psychic Tests: An Adventure in the World of Believers and Sceptics (Pantera Press, 2021)

Allow me to declare my hand. I’m a sceptic. It seems I’m in the minority, however. Many people, including not a few high flyers in politics and business, more or less firmly believe there are folks out there with the ability to predict the future, locate missing people or relay messages from your dearly departed.

In The Psychic Tests Gary Nunn, himself a declared sceptic, actually concludes there is significant value in what psychics, mediums and astrologers do.

Nunn’s assessment is far more sympathetic than I could have managed. One reason may be that he willingly subjected himself to many sessions with psychics and mediums, a degree of commitment I find amazing. Nunn, however, found many of these experiences to be positive and life-enhancing, so much so that he became almost addicted to them.

My own personal experience amounts to just one group session with a medium channeling messages from beyond the grave. In that instance no money changed hands and I’m persuaded the medium truly believed she had this uncanny ability, but what I saw was a classic case of cold reading. She would make a statement, then ask questions like ‘Does that mean anything to you?’. If the person responded, she would home in on any information they gave. Two examples from that session stuck in my mind.

In one, the medium, who doesn’t usually get names from the spirit who’s hankering to communicate, did in fact get a name: Paul. “Do you know a Paul?”, she asked. John, who I’d known for some 15 years, replied that he did. Paul was his brother, but he wasn’t dead. The medium continued unabashed, suggesting there was a (deceased) Paul wanting to speak to John and began painting a vague picture of the two of them hooning around in their late teens, an activity she intimated may have had tragic results. To his credit, John gave her nothing to go on. In the end he asked straight out: “Can you tell me what I was doing at 19?”. She began wildly guessing: the army? Travelling? In fact, John at that age had been in a Catholic seminary for some years; the last thing he was doing was hooning around in cars. Despite this obvious ‘miss’, the medium insisted to the last that John would eventually realise who this ‘Paul’ was and know that he had been contacted from beyond the grave. John himself unfortunately passed away some few years later, but he never did recall a dearly-departed Paul.

I can imagine why the medium – I stress, in good faith – got this picture of ‘Paul’ and his dying circumstances. John was of solid build, with a moustache you could imagine on someone who’d lived a bit of a rough life and was (contrary to the truth) something of a hard drinker and a rev-head in his younger days. The only cues she had to go on were appearance.

In another case from the same session, the medium got a sense that another friend of mine, an older gent, had lost a son. This son was wanting to say he was sorry for the conflict between them and tell his dad they were all good now. My friend replied that yes, he had lost a son. A hit! However, the son he lost was just a few days old when he died. The moment this information was received the medium promptly dropped the conflict angle and tailored the ‘reading’ to suit a departed new-born.

This is precisely how cold reading works. You make a general statement and glean whatever you can from the responses, refining the story as new information is given. Most people, for example if they’ve lost a baby, have an understandably emotional reaction to discussing it. Competent mediums – as Gary Nunn finds – are typically warm, engaging and emotionally intelligent people. They’re also good at reading body language. They put you at ease and focus on you in a way that encourages you to freely give up helpful information. The Barnum effect does the rest.

PT Barnum is famous for providing entertainment to appeal to a wide range of people at the same time, kids and adults alike. The Barnum effect (or Forer effect), as Nunn explains it, is

a psychological phenomenon that explains the powerfully seductive effect every star sign and every medium and every psychic has when they speak directly to you, when you feel vague, ambiguous and broadly applicable personality descriptions are tailored specifically for you. When you get that pleasantly eerie feeling that they’ve nailed you.

There some excellent videos of exercises with unwitting participants demonstrating exactly this.1.

People who said I was accurate were claiming I’d said things that I hadn’t… People were adding their own interpretation to what I was saying… I’d weave a story and, later, the customer’s memory would add new elements.

Interestingly, the medium in my experience above avoided coming to me. Clearly, I given enough sceptical cues that she considered it either too risky or at least unprofitable. When I enquired if there was anyone ‘up there’ wanting to speak to me, she indicated there was not. I confess to being disappointed (but not surprised).

In Nunn’s rather more considerable experience, psychics et al are a worthwhile sounding board, helping people to cope at anxious moments in their life or enabling them to deal, at least in the short term, with grief. Not all of them are benevolent, however, and not all are good at it.

He cites instances of psychics debunked, psychics cynically in it just for personal profit and psychics who get it horribly wrong (e.g. advising the parents of a missing child that the child was dead, only for them to turn up a few years later). 2. As for the psychics ‘working’ with/for police (and there are plenty, though rarely is it officially acknowledged): “the fact remains that William Tyrrell and Madeleine McCann are missing to this day.”

On balance, though, while he holds open just the tiniest sliver of possibility that some of their ‘gifts’ might be genuine, Nunn proclaims the worth of psychics, mediums and astrologers in terms of human connections and making people feel better about their lives.

It should be noted that the idea of profiting from these practices, as Nunn observes, is not necessarily bad, any more than priests earning a living from mediating the Sacred to the masses is bad. (Some might call both deplorable, of course!)

Indeed, Nunn laments the hypocrisy behind the way this sphere of activity is officially excluded from our good Christian society:

What do we do with people who believe in all the supernatural ‘miracles’ of Christianity? We give them huge tax breaks to run massive, influential organisations, a slot on BBC Radio 4’s Thought for the Day and a reverence that discourages blasphemy. But what do we do with psychics and mediums? We dismiss and deride them, diminish them to the position of entertainers, laugh at anyone who takes them even remotely seriously. It’s a curious double standard. And one that seems even more bizarre when many Christians – rather superciliously – denounce psychics as occultists or counterfeits, in accordance with the Bible’s teachings.

I quite agree it’s a double standard, but I’d solve it by demoting Christianity rather than elevating another dubious spirituality to what I see as a position of undue influence.

Much of this, for me, comes back to the value of truth. My take is that it’s better to stare into the abyss of reality than fool ourselves with fairy stories. The natural world is miraculous enough, in my book.

I have to confess, however, that I’m tempted to further my own direct experience, and I’m open to the idea that I could change my view to align with Nunn’s. His life experience is radically different to mine, though: as a wounded gay man who has had difficulties coming to terms with his own father’s death, perhaps he is naturally more open to the positive human skills he encountered. He says, in the context of grief:

Only a psychic can give the phoney – and essential – assurances that provide a moment of solid optimism in despair that, crucially, lifts you to the next moment. Sometimes it doesn’t even matter if it’s true or even likely.

I largely accept Nunn’s view that much scepticism “overlooks the role that psychics, mediums and astrologers play in the complicated interwoven tapestry that goes into making our lives bearable, interesting and meaningful.” However, I feel that for me, it matters greatly whether their psychic abilities are genuine. If I do make the effort to consult some psychics I doubt I’ll find veracity in their predictions or revelations, but I won’t completely discount the possibility: that would be irrational. Extraordinary claims, however, require extraordinary evidence.

One issue Nunn raises gives me particular pause for thought. The majority of practitioners are women. This field has long been one in which marginalised people, those granted a very limited ability to participate or be heard in much of our society’s life, can be taken seriously and exercise a degree of authority. That fact alone ought to temper any temptation to dismiss or belittle all psychics as gullible or worthless.

The Psychic Tests is not, I have to say, a satisfying work of literature. It’s written by a journalist and is a very personal, and often jocular, account of a dive into this particular pool. It must, though, be credited with raising some important points concerning phenomena that are rarely seriously considered.

‘I said to her as we were washing dishes and she was wiping, I said, “Sylvia, how can you tell people this kind of stuff? You know it’s not true, and some of these people actually are probably going to believe it.” And she said, “Screw ’em. Anybody who believes this stuff oughta be taken.”’

Photo by Scott Rodgerson on Unsplash