A visit to the Ration Shed 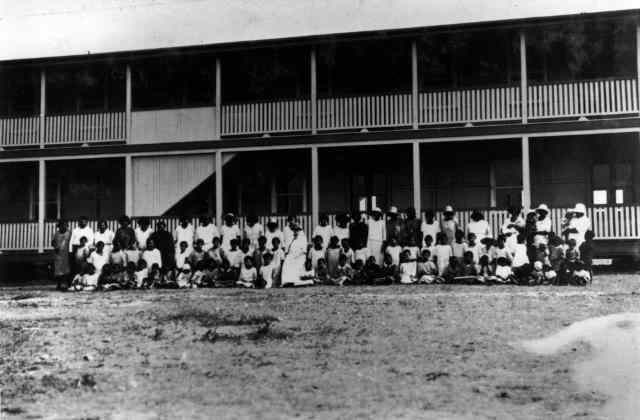 What is a whitefella of English descent to make of the Ration Shed?

Imagine being taken from your mother on your fifth birthday and placed in a dormitory. The dormitory was built to house fifty children but eighty live there. Your parents and siblings can’t see you without rarely-granted special permission from the superintendent. Discipline is harsh, food is poor in both quantity and nutritional value, bedding is very basic and inadequate on cold nights, and the only source of human comfort is the children with whom you share these appalling conditions. At 14 years old you are sent out to work.

Boys and girls dormitories along these lines were just one horrible feature of life at Cherbourg in Queensland’s Burnett region, one of the 64 reserves and missions operating from 1898 right up to the late 1980s. The Ration Shed is a museum at Cherbourg which documents the conditions Indigenous people faced and the stories they tell of their time there.

People removed to Cherbourg were torn from family and culture, and were often far from their own country and tribal group. Their treatment pretty much ensured that they would be spectacularly unsuccessful in many of their later relationships and, all too often, would be primed for addiction to alcohol or drugs.

The stories are heart-breaking. A few examples from former ‘domo’ (dormitory) boys and girls at Cherbourg:

“…we could never get to cuddle mum. She couldn’t cuddle us… she died when I was only eleven so I never had the chance to give mum a hug.”

“…leaves a bloody void in my heart… there was nothing, nothing there, there was no compassion… it was very hard for me to handle life, love, for me to give love. I can’t even express it.”

“I didn’t know you had to have a mother to exist. I just thought it was a token name you gave someone you liked.”

“It wasn’t until I was 10 or 11 that I found out that I actually had a brother there… He was in the boys’ domo… So there was no family, no connection with mother…”

“You can count on one hand the number of boys actually married… We weren’t taught how to love a girlfriend, a wife or to be good fathers, role models. The emphasis was on discipline.”

Ironically, the impetus for reserves like Cherbourg was ‘protection’. Archibald Mason, a journalist, property manager and one-time MP for Rosewood near Brisbane, has a chequered record regarding Indigenous people, but he is in part responsible for the Aboriginals Protection and Restriction of the Sale of Opium Act of 1897. In 1896 he declared:

Kidnapping of boys and girls is another serious evil… Boys and girls are frequently taken from their parents and their tribes, and removed far off whence they have no chance of returning; left helpless at the mercy of those who possessed them, white people responsible to no-one and under no supervision by any proper authority… Stringent legislation is required to prevent a continuance of abuses concerning the women and children.

The ‘sanctuaries’ like Cherbourg which resulted, however, became brutal reform institutions ultimately serving the labour needs of cattle properties throughout Queensland.

It was recognised very early on by a few that the Protection Act was far from in the best interests of Aboriginal people. In 1901, the year the Cherbourg mission (then named Baramba) was established, John Webber of the Queensland Legislative Council opined:

By removing the Aboriginal against his will they were virtually denying his right to live at all. The Bill made them absolute slaves: they could do nothing without Protectors, and the Protectors could do just as they liked… To take them away from the bush and put them on distant reserves is everything that is stupid and bad.

Given what we know of child sexual abuse in the just the last 50 years, one can imagine the horrors some of these children were subjected to. Indeed, adolescent girls were sent from Cherbourg to work as domestic servants – slaves, essentially – on rural properties. Anglican minister G.W. Shand noted in 1922:

It is becoming a regular thing for girls to return from domestic service in a certain condition and remain at the dormitory until the child is born, the father of the child being a white man.

To the best of my knowledge, my uncles and aunts on Queensland’s Darling Downs did not know much about the ill-treatment of Indigenous people during and after the frontier wars of the 1840s and 50s. I conclude that a wall of silence was established by some of their parents and grandparents who must have known about, if not participated in, the notorious ‘dispersals’ and removals which resulted in the Downs being almost bereft of Aboriginal people within a decade of European ‘settlement’.

We are still discovering massacres and other abuses in Australia that official records redacted or omitted to mention.

I know precious few details, but I’m aware that my own great-grandfather, a baker in Cooktown, had an Indigenous man (‘boy’) as a servant.

Though I didn’t learn about it until much later, the abusive control of Indigenous people at Cherbourg and elsewhere was still happening when I was a schoolboy in the 1960s, enjoying my white privilege and the spoils of the land which had been stolen and used for their own gain by my own people.

Does all this make me complicit?

John Winston Howard says not. According to our erstwhile PM,

In contrast, the conservative Henry Edward King, Queensland MLA and fervent supporter of the native police system, averred in Parliament in 1875: 1.

[if my generation and the pioneers before me] were not justified in taking possession of this country, then all who come after the pioneers were just as much to blame as those who had to push into the interior and fight their way against the blacks.

I have no idea how I would have thought and acted had I been around when these issues were initially troubling the colonial conscience. I hope I might have had the courage of journalist Carl Feilberg (1844-1887), who has been described as a “secular-minded, undogmatic, agnostic individual who rejected miracles, religion and clergy” – in many ways a man after my own heart.

Feilberg campaigned for Indigenous rights in the 1870s and 80s in the face of bitter political and social opposition, producing a pamphlet in 1880 titled ‘The Way We Civilise’ as editor-in-chief of the Brisbane Courier and its weekly magazine The Queenslander. Although influential at the time, he did not prosper, and was largely written out of Australian history.

What could I do that might be an appropriate response to understanding some of the terrible history suffered by Indigenous Australians?

Raising awareness and speaking against ignorant prejudice is one response. I have not always done this as tactfully as I might, and I do think tact is necessary to ensure I’m not simply reinforcing stubbornly prejudiced views. I have at times been accused of ‘virtue signalling’: that is a small price to pay, but perhaps it indicates the need for more attention to tact in presenting my views.

My line of work involves helping to embed Indigenous perspectives in teaching the Australian Curriculum, an important measure to ensure that today’s schoolchildren are more informed that I ever was at school about Indigenous people and their history.

Helping to see a SOFiA conference materialise on The Statement from the Heart is a significant measure too, I believe. COVID-willing, this will take place in Brisbane on June 5, 2021. (Mark the date!) One key element of The Uluru Statement is Makarrata: a truth-telling commission.

Supporting initiatives to help Indigenous Australians regain their cultures and improve their wellbeing is also an important action. This is never a one-way transaction, though: Aboriginal people in my experience are a generous mob, and – as the Statement demonstrates – their astonishing cultures are a gift to all Australians. Their heritage nowadays, in spite of how they’ve been treated, is there for all of us to appreciate and learn from. If nothing else, we desperately need to learn about sustainability, which Australian Indigenous societies had in spades, being the oldest set of continual human cultures on earth.

A tour of the Ration Shed is a painful experience. It’s also enriching and enlightening, and I would encourage everyone to consider taking the opportunity.

Unless otherwise noted, all quotes are from the displays at the Ration Shed Museum. The Museum offers guided tours.

The Queensland Government has a useful summary online of the history of the Cherbourg reserve.

A summary of the treatment of Indigenous people in Queensland can be found in the 1997 Bringing Them Home Report, Chapter 5.