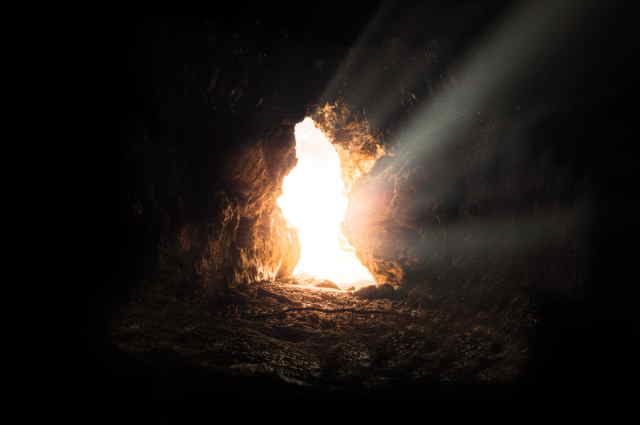 According to the book of Acts, Paul’s experience of the risen Jesus on the road to Damascus is a spiritual manifestation, a vision. It says the men who journeyed with Paul shared in the experience, but only to the extent that they heard a voice – they saw no one. Interestingly, Paul’s language in 1 Corinthians 15 suggests that his experience of the risen Jesus was, nevertheless, the same as that of the others to whom Jesus was said to have appeared. Paul makes no distinction whatsoever. This is such an important point because Christianity has superimposed the Gospels’ later embellished versions of the resurrected Jesus over the top of Paul’s very spiritual understanding and reads into 1 Corinthians what simply is not there. What I am saying is that if we take Paul’s witness alone it is quite different from the idea of the resurrected Christ that many of us grew up with. And why should we not take Paul’s witness in isolation? After all, he was the first to write part of what we now know as the New Testament.

Notwithstanding the elusiveness of its true meaning, it is safe to say the state of mind of the first believers was that of resurrection power and this gave birth to the Jesus Movement. Exactly what that state of mind was, what resurrection power meant to them and how it all transpired, we can now only speculate upon. There is no CNN footage and in the New Testament we have only an interpretation of events rather than the historical facts themselves. We can be certain, though, that the foundation members of the Jesus Movement saw everything within the framework of their Jewish culture. It could not have been any other way. Thus, whatever their belief in connection with the resurrection of Jesus, it is certain they understood it as the harbinger of the fulfilment of all of Israel’s nationalistic hopes. In the ensuing years after the destruction of the temple (AD 70), Christianity was hijacked by the Gentiles and the hopes of the resultant Neo-Christianity took on quite a different collective form by comparison. Either way the subsequent passage of time demonstrated the futility of all forms of man-made Messianic hopes, and, from the perspective of many thinking people today, 2000 years has absolutely put paid to them.

Having said that, I hasten to add that I still value the Bible. I see it as a literary masterpiece, a work of art, an invaluable insight into the evolution of human God-consciousness over a vast period of time. I see it as man’s witness to man’s God-experience, expressed in man’s words, according to man’s worldview and cultural conditioning.

Whoever Jesus was or wasn’t, whatever he did or did not do, whatever he said or did not say, I cannot escape the fact that the story of his life has made an indelible impression on me and much of my world. So, having come to a knowledge of the literary liberties of my spiritual counterparts of yore, and being thus emancipated I now feel free to apply a slant to the story of Easter which is different from theirs. Assuming the first believers experienced a conviction that Jesus, in some way, shape or form of which I personally have no grasp, cheated death and gained immortality, I wonder if the story cannot be gleaned by 21st century pilgrims and even now possess some life enhancing quality for us.

As the crux of this article is about finding a new meaning for the old story of Easter it is simpler for me to speak of God in the realist terms of the earliest interpretation of the tale. I am working off the original script, so to speak. The issue here is not about explaining who or what God is, but rather about understanding who Jesus was. Which in turn, hopefully, will present us with a clearer picture of who we are.

The New Testament account, no doubt, has Jesus manifesting the attributes of God in his humanity. But by claiming that Jesus actually is God, Christianity negligently robs the resurrection story of significance. I propose that a fully-human-Jesus version gives the Easter story, as no other version can, a meaning which includes us at its very centre. That the only valid telling of the Easter story is one that highlights Jesus’ oneness with us. This way, by believing Jesus to be raised from the dead (whatever may be one’s ultimate understanding of that), a stunning, positive declaration is made in favour of the entire human race (not only Jesus). When we see in Jesus a complete oneness with us in every sense of the meaning, we suddenly make a connection between the story of his resurrection and the whole human family that we could not make before. By this I mean it would be impossible to make that connection if we thought of him as the miraculously conceived Son of God or someone even more remote from us, the pre-existent Creator of the universe! What would be at all surprising about one such as that rising from the dead? It would be expected. He was God! But now, by freeing Jesus of these embellishments, we can adopt a new purpose for the story of his resurrection – that is, to change the way we view ourselves in relation to God.

The Christian view that we are vile, fallen sinners banished from the presence of God is, of course, totally wrong and destructive, and serves only to promote the domination system from which, the Gospels tell us, Jesus came to set us free. When I see Jesus as wholly human, a man in complete solidarity with us in every way, Easter takes on a wonderfully fresh meaning.

understood as God’s vindication of Jesus. It meant that God had said ‘yes’ to the pre-Easter Jesus – his message, activity and vision. Just as the execution of Jesus was the domination system’s ‘no’ to Jesus, so the resurrection was God’s affirmation of what had begun in Jesus.

So God approved of the life of this man. A man whom the religious elite saw as a scandalous embarrassment. An outrageous itinerant, of dubious paternal lineage, who befriended the riff-raff of society and had no sense of religious laws or cultural prejudices. Someone they saw as a glutton and a drunk. I, on the other hand, am thrilled that the Gospels have the manifestation of God taking place in someone with whom I can totally relate! In the story of Jesus I learn that life is not about religion. It is not a religious test. It is about putting the same value on my fellow human beings that he put on them. I learn to love and accept my fellow man unconditionally. Why shouldn’t I? We are all in the mix together, Jesus included – and he is seen as a man approved! I prefer this understanding of Jesus’ message: We are all approved. Know it. Live it. And see value in everyone.

Thankfully I no longer subscribe to a belief system that inflicts upon believers the notion of inherent sinful depravity. Our unembellished view of Jesus reveals this to be a notion that is utterly false. Worse than false, it has an insidious self fulfilling tendency. Our problem is not sin and guilt, it is estrangement from God. At least, the perception that we are estranged. That is what we have been taught and, sadly, that is how we have lived.

I see in this new understanding of the person of Jesus, salvation from our self-imposed estrangement. There is no atonement theology here, no teaching of a divine Jesus. Just the message of how a failed, suffering human can bring hope to us all. He taught us there is no gulf between us and God and invited us into the kingdom, or, as I see it, the party of life. It is a come-as-you-are party, and it has already begun. This, I think, is a better understanding of Easter.